Formerly a series of independent kingdoms, the country of Wales was incorporated into England by the Act of Union of 1536. It is now part of Great Britain. Modern-day Wales has a distinct culture and language. Approximately 30 per cent of the three million people living in Wales today speak Welsh. A good number would immigrate to Canada. The 2016 census reported 474, 805 people of Welsh origin in Canada (25,190 single and 449,610 multiple responses).

Formerly a series of independent kingdoms, the country of Wales was incorporated into England by the Act of Union of 1536. It is now part of Great Britain. Modern-day Wales has a distinct culture and language. Approximately 30 per cent of the three million people living in Wales today speak Welsh. A good number would immigrate to Canada. The 2016 census reported 474, 805 people of Welsh origin in Canada (25,190 single and 449,610 multiple responses). 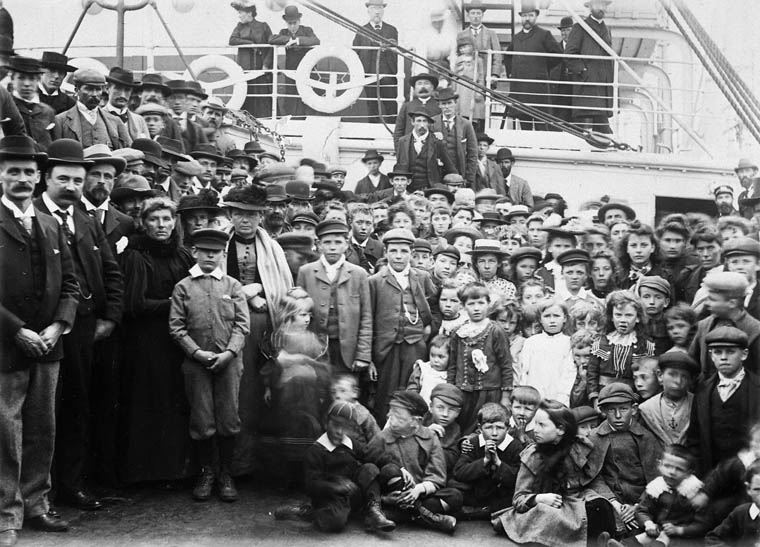 It is difficult for historians to pinpoint exact numbers of early Welsh immigrants to Canada, given the country’s close relationship with England. Welsh people who arrived in Canada over the years were often recorded as English or British. This is because the Canadian census didn’t always have a separate category for Welsh immigrants, as they did for immigrants from Ireland or Scotland. Official numbers are almost certainly lower than they should be for this reason, especially as many migrants left from the large port at Liverpool.

One of the first Welsh settlements in Canada was established on the southern Avalon Peninsula (Newfoundland) in 1617 by Sir William Vaughan, a strong supporter of colonial expansion. Despite the failure of the venture, Vaughan wrote two books promoting Newfoundland, and thereby provided two of the earliest works about English North America.

In 1819, 180 migrants travelled from Wales to New Brunswick. 150 Welsh migrants arrived in Fredericton and later founded the nearby Cardigan Settlement.

Many Welshmen would serve in the British forces in British North America during the American Revolution, the War of 1812 and the Rebellions of 1837. Many subsequently stayed and settled. There was also a specific area of Welsh settlement along Lake Erie that absorbed the immigrants of the 18th and 19th centuries.

A second immigration cohort was sparked by the Cariboo gold rush in British Columbia in 1862. During the 20th century, Welsh immigration patterns reflected the ebb and flow of economic depressions and world tensions. This was similar to English, Irish and Scottish immigration patterns. After British Statesman David Lloyd George visited Canada in 1899, he endorsed the Canadian West as a good prospect for immigrants. George, who served as British Prime Minister from 1916 to 1922, was born in England to Welsh parents and was raised as a Welsh speaker.

In the late 1800s, a third immigrant cohort – the “Patagonian Welsh,” so named for their 35-year sojourn as a Welsh colony in Argentina – were relocated in Saskatchewan. Around the same time a few Welsh American farmers settled at Wood River, Alberta. During this period, Welsh labourers living in Wales were also recruited to come to Canada to build the new railway at Crowsnest Pass, where workers were met with brutal and dangerous conditions. The Welsh miners who settled in this area brought with them a long history of organized labour and were at the forefront of the fight for workers’ rights there (see also Frank Henry Sherman). In 1906, 5,018 Welsh settlers arrived. Immigration continued after the First World War, and again from 1926 to 1929. Immigration was also high in 1946 (1,294 people) and after the Suez Crisis in 1957 (2,629 people). Overall, from 1900 to 1950, more than 50,000 Welsh came to Canada.

Historically, Welsh community churches played a key role in the maintenance of the Welsh language and culture. Welsh-speaking immigrants often settled into British-Canadian environments. Many were quickly culturally assimilated as they only spoke Welsh on Sundays at church.

There has never been a national society for the preservation of Welsh culture in Canada. However, there are several Welsh cultural organizations and festivals. Most major Canadian cities have a St. David's society named after the patron saint of Wales, which frequently organize cultural events and Welsh language classes, and some have Welsh choirs, for example, in Montreal, Toronto and Edmonton. (See Welsh Music in Canada; St. David’s Welsh Male Voice Choir). St. David's Day, March 1, is celebrated by some Welsh Canadians, and there are also traditional Welsh festivals of Gymanfa Ganu and the eisteddfods, which celebrate music, song and poetry.