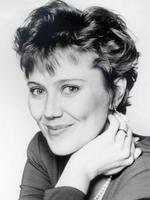 Anderson's opera career blossomed in 1995 with her European debut as the Maid in the premiere of Thomas Adès' Powder Her Face at the Cheltenham Festival. The role, which she reprised at the Almeida Theatre in London (1995), in Nantes (2000-1), and in a concert version with the London Symphony Orchestra (2006), cemented her reputation as one of the foremost performers of contemporary opera. Her collaboration with Adès continued fruitfully, and includes the 1997 recording Life Story. The recording made from the Almeida Theatre show earned her a Grammy nomination in 1999. She premiered Gavin Bryars' Dr. Ox's Experiment with the English National Opera (1998); performed the concert version of Elliott Carter's What Next? in Holland (2000), England (2000), and Belgium (2002); and performed with the Calgary Opera in the title role of Carlisle Floyd's Susannah (2001). In Canada, she has appeared with the Edmonton Opera, the Manitoba Opera, the Canadian Opera Company, and the Vancouver Opera.

Anderson has often been a soloist with ensembles, such as the Ensemble InterContemporain under Pierre Boulez in 1998 and again in a 2000 tour on the occasion of Boulez's 75th birthday; the BBC Scottish Symphony Orchestra in Boulez's Pli selon pli (1999); the BBC Symphony Orchestra in Nielsen's Symphony No. 3 (1999); the Boston Symphony in Kaijo Saariaho's Le Chateau de l'âme (2000); the London Sinfonietta in Oliver Knussen's Higglety Pigglety Pop! (2002); the London Symphony in 2002-3; and was a part of the Berlin Philharmonic's US tour in 2003 under Sir Simon Rattle.

Valdine Anderson's sound, which has been especially praised in Baroque and contemporary music circles, has most often been described as forthright and clear. These qualities have often led to comparisons with celebrated US soprano Dawn Upshaw; Anderson has on several occasions replaced her in concerts. Far from simply being a similar-sounding voice, Anderson knows how to take ownership of the material she sings and give the sense of almost living it. Referring to Brett Dean's Wolf-Lieder, Hilary Lynch from The Times (London) wrote: "[she] internalized its challenging vocal writing so entirely that, even in its first performance, she made it deeply expressive . . . " (17 Jan 2007).

Anderson began teaching voice at the University of Manitoba in 2004.