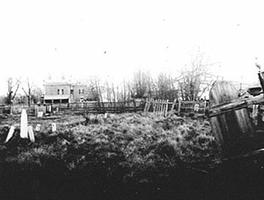 Victoria cemetery, circa 1885. It was used as the final resting place of some 500 soldiers and their families (courtesy Toronto Reference Library, Baldwin Room/B 11-15b). 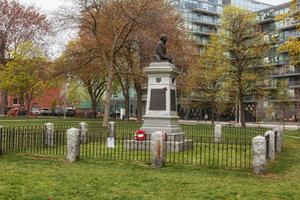 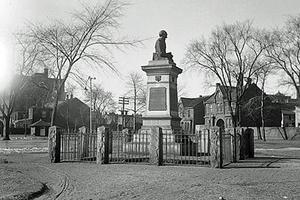 It must have been a gruesome sight as the surf washed away the sandy bank on the east side of Humber Bay in the spring of 1829 to reveal human remains. They were identified--perhaps through fragments of uniform like officer's epaulets or corroded buttons--as Captain Neal McNeale of the 8th (King's) Regiment of Foot.

At the head of his company, McNeale was one of 46 killed in a bayonet charge, an unsuccessful attempt to repel the American landing on 27 April 1813, near the foot of present-day Dowling Avenue. Like most who fell during the SACKING OF YORK, McNeale was buried hastily where he lay.

He was the first of numerous skeletal remains unearthed along the lakeshore in the next century along with bullets, coins and other relics of the WAR OF 1812. He was one of the few to be definitively identified.

Hearing of the discovery in 1829, the commanding officer at Fort York ordered McNeale be reinterred in Victoria Square--then known as the military burial ground.

This was done on 9 May with full military pomp and ceremony--befitting an officer fallen in heroic action--with a rifle salute and a military brass band performing a mournful dirge before a gathered crowd of townspeople.

Renamed Victoria Memorial Park in 1905, the military burial ground became a site of commemoration for the War of 1812, formalized with the addition of a monument by architect Frank Darling and sculptor Walter S. ALLWARD. Though the gravestones have long since been removed, at least 400 burial sites remain untouched within the boundaries of the park.