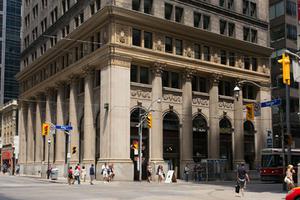 The Royal Bank, at 20 storeys the tallest of the four towers, at 2 King East (photo courtesy James Marsh). 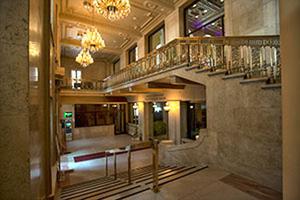 Passengers riding aboard a Toronto Railway Company streetcar were startled when a large piece of stonework crashed through the wooden roof of the car while they passed by the intersection of King and Yonge streets. Fortunately, no one was sitting near the area where the stone landed and there were no injuries.

The date was 10 Aug 1911, and construction was under way on the Canadian Pacific Building, the city's newest skyscraper. The CANADIAN PACIFIC RAILWAY was the largest private landowner in Canada and had purchased a lot at the southeast corner of King and Yonge streets. Toronto's central business district had been gradually shifting west and this was now the most prestigious corner in the city.

Throughout most of the 19th century, the tallest structures in town had been church steeples. The development of steel-framed buildings and efficient elevators resulted in new SKYSCRAPER office buildings after the turn of the 20th century. Four of these were built near this intersection: the 15-storey Traders Bank at 61-67 Yonge in 1905, the Canadian Pacific at 1 King East in 1913, the Dominion Bank at 1 King West in 1914 and the tallest of them all at 2 King East, the 20-storey Royal Bank. All 4 buildings still exist, although overshadowed by taller structures surrounding them. The Dominion Bank has been incorporated into a condominium tower.