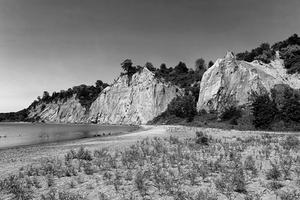 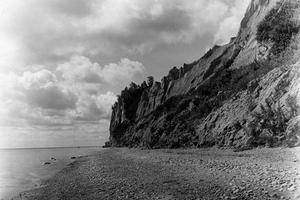 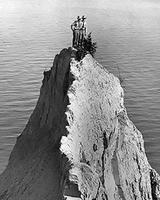 When water travel was the preferred way in and out of Toronto, the Scarborough Bluffs were the equivalent of today's CN Tower--a defining landmark of Toronto and its surrounds. Aboriginal peoples, early French traders and the area's first British settlers alike admired their sheer height and beauty.

In the words of Elizabeth Simcoe, who first saw the bluffs in 1793, "the shore is extremely bold & has the appearance of Chalk Cliffs but I believe they are only white sand--they appeared so well, that we talked of building a summer residence there & calling it Scarborough." With that notation, Governor John Graves Simcoe's wife gave a name to a future city and the towering bluffs along the shoreline.

Rising up to 100 metres above the shore and running 15 kilometres along Lake Ontario, the Scarborough Bluffs are the remains of an ancient, now-eroded lake delta. The Bluffs contain a rich geological record of early life in the area, preserved through fossils of plants and animals. At the water's edge is Bluffers Park, a popular recreation area built from lakefill. Erosion along the bluffs still occasionally threatens to topple houses at the cliff's edge.