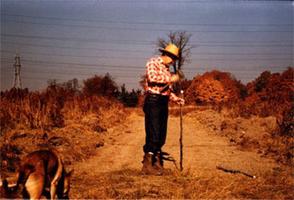 J.N. Emerson at the Parsons site, circa 1953 (courtesy Department of Anthropology, University of Toronto). 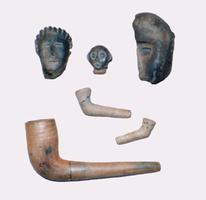 The Parsons site, which is named for a landowner, covers a grassy hydro corridor in North York overlooking Black Creek that was, around 1450, a thriving HURON-WENDAT village. Yielding more than 250 000 artifacts to archaeologists, the site may hold the secret to a pivotal period in the history of its occupants, the ancestral Huron-Wendat people.

Archaeologists began excavating the Parsons site in 1952. The most recent dig, in 1989-1990, cleared a trench through the site to make way for underground services. That trench alone revealed the remains of 10 longhouses, a number of underground sweat lodges, a surrounding palisade and four middens (refuse areas). The village was at least twice the size of earlier documented village sites in the HUMBER RIVER valley.

Its size, and the relatively haphazard nature of the layout of the LONGHOUSES within it, suggests that the village may, in fact, have comprised people from a number of smaller, earlier villages, who may have come together to benefit from the strength in numbers. The log walls surrounding the village, not present at earlier sites, indicate that the Parsons group had to defend itself against hostile groups in the area. Combined, these and other clues suggest that the site may capture a critical period in ancestral Huron-Wendat history when small groups merged to form the large villages that visiting JESUITS made famous 200 years later.

Those Jesuits also spoke of getting lost in cornfields around Huron-Wendat villages. An agricultural people, the ancestral Huron-Wendat relied heavily on a diet of cultivated corn, beans and squash. In other words, centuries before this part of Toronto saw its first European fields of corn, Aboriginal peoples had preceded them. The trees the first Europeans cleared here were those that had grown over the Huron-Wendat fields.