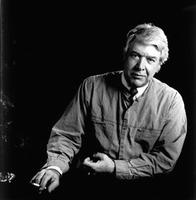 Timothy Findley, OC, O Ont, writer, actor, playwright (born 30 October 1930 in Toronto; died 20 June 2002 in Brignoles, France). An Officer of the Order of Canada and two-time winner of the Governor General’s Award, Timothy Findley was accomplished as an actor, novelist, and playwright, and was one of the most singular and influential talents of his generation.

Early Career in the Theatre

During his career as an actor, Findley was a charter member of the Stratford Shakespeare Festival (1953). He appeared in the first production of Thornton Wilder'sThe Matchmaker(1954) at the Edinburgh Festival in Edinburgh, Scotland, and played Peter Pupkin in Sunshine Sketches, a 1952 CBC television adaptation of Stephen Leacock’s Sunshine Sketches of a Little Town (1912).

Although he had been aware of his homosexuality from an early age, Findley married actress and photographer Janet Reid in 1959 — the marriage ended in divorce two years later. In 1963 he met writer William Whitehead and the two remained domestic partners until the end of Findley’s life. Findley and Whitehead worked on numerous projects together, including the 1974 CBC docudrama The National Dream, based on Pierre Berton’s books The National Dream: Building the Impossible Railway (1970) and The Last Spike (1971), as well as the documentary Dieppe 1942 (1979). Whitehead also managed Findley’s career.

Findley’s close friend, the actress Ruth Gordon, who also worked as a screenwriter and playwright, inspired and encouraged him to try his hand at writing. He published his first story, “About Effie,” in the Tamarack Review in 1956, and by the end of the 1960s he had given up acting and was writing full time. “It has been the greatest advantage I had when I began writing seriously, to have been an actor,” Findley remarked in 2002. “The best apprenticeship for a writer. Because you learn language, structure, cadence, rhythm, how to build tension.”

He published his first novel,The Last of the Crazy People, in 1967 and the second,The Butterfly Plague, in 1969. But Findley’s real breakthrough came with The Wars. Published in 1977 (it would appear as aNational Film Boardfeature, with a script by the author, in 1983), The Wars won the Governor General's Literary Award and an international reputation.

The Warsdepicts the experiences of a young Ontario man during the First World War. In his introduction to the 2005 Penguin Modern Classic edition of the book, Canadian novelist Guy Vanderhaeghe claimed that it is the best historical novel ever written by a Canadian. Running slightly over 200 pages depending on the edition, The Wars is remarkably compressed for a historical novel (compare it with Jane Urquart’s 400 page The Stone Carvers), and Findley uses this to great effect. According to Vanderhaeghe, “Findley achieves this impressive economy by piecing together a collage of arresting images and brief, telling scenes that not only cohere in a compelling narrative but whose form mimics the fractured lives of soldiers and civilians by war.”

Findley’s next novel, Famous Last Words (1981), deals with the life of a fictional man of letters during the rise of fascism and the Second World War.Not Wanted on the Voyage (1984) handles the myth of Noah with considerable wit and invention.The Telling of Lies (1989) is a mystery.Headhunter (1993)pictures a Toronto replete with upper-class violence and evil; and,The Piano Man's Daughter (1995), set in 1939, focuses on a young piano tuner forced to face the questions of his father's identity and his mother's madness.. In Pilgrim (1999), a troubled immortal (the “Pilgrim” of the title) is brought to psychoanalyst Carl Jung’s clinic in Zurich following a failed suicide attempt in order to regain his lease on life. Findley's last novel, Spadework (2001), returns to the theatre scene of his youth in Stratford, Ontario.

Inside Memory: Pages from a Writer's Workbook(1991) is a collection of personal journal entries and autobiographical reflections. From Stone Orchard (2001) is a memoir of life on the farm he shared with William Whitehead, Stone Orchard, near Cannington, Ontario.

Findley's plays performed onstage includeCan You See Me Yet? (1976),The Stillborn Lover(1993), Shadows (2001) and his last drama,Elizabeth Rex (2002), which won him another Governor General's Award. He also wrote the TV scripts forThe National Dream(1974, written with William Whitehead) andThe Whiteoaks of Jalna (1971–72).The Trials of Ezra Poundpremiered at the Stratford Festival in 2001 andShadowswas staged in August 2002 at the Toronto Centre for the Arts’ Studio Theatre. Findley was working on a version of Euripides’ The Trojan Womenfor the Stratford Festival when he died in 2002.

Findley received numerous awards for his work. In addition to being a two-time winner of the Governor General’s Award, he was made an Officer of the Order of Canada (1986) and was also made a Chevalier dans L'Ordre des Arts et des Lettres by the French government in 1996. The City of Toronto Book Award, the (Ontario) Trillium Award, a Mystery Writers of America "Edgar", two Canadian Authors Association awards, the Toronto Arts Award in Writing and Publishing, and several honorary doctorates are among the honours bestowed upon him. In 1986–87 he presided over the Canadian division of PEN International. He was active in anti-censorship and other causes, and in 1991 was named to the Order of Ontario.