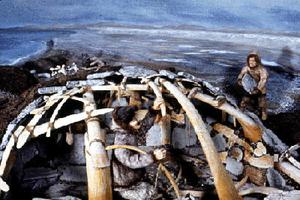 The floors and lower walls are made with flagstones, and the roof is held up by whale bones covered with skins and slabs of rock. The house is then covered with sod (courtesy CMC).

Thule culture, 1000-1600 CE, represents the expansion of Alaskan Inuit across arctic Canada about 1000 CE and the gradual displacement of the Dorset peoples who occupied the area previously.

Thule people brought with them a sophisticated sea-hunting technology that had been developed in the Bering Sea area. They hunted animals as large as bowhead whales and were able to store sufficient food to allow winter occupation of permanent villages composed of houses built from stone, whalebones and turf.

Most Thule artifacts were made from bone, antler, ivory and wood; they used few stone tools, preferring cutting edges of metal obtained either from natural deposits or from Greenlandic Norse. Thule culture declined after about 1600 AD from a combination of deteriorating climatic conditions and the introduction of diseases from contact with Europeans, but the people continued to occupy arctic Canada and are directly ancestral to the historic Inuit.