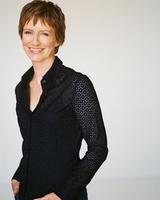 Susan Coyne was a driving force behind the critically acclaimed television series Slings and Arrows (photo courtesy of Tim Leyes).

Helen Susan Cameron Coyne, actor, writer (b at Ottawa 16 Jun 1958). Susan Coyne is the daughter of Hope Meribeth Cameron (née Stobie) and James COYNE, the controversial governor of the Bank of Canada from 1955 to 1961, and the sister of journalist Andrew Coyne. She was educated at the St. John's-Ravenscourt School in Winnipeg and at Queen's University (BA honours in history in 1980) and trained at the NATIONAL THEATRE SCHOOL in Montréal, graduating in 1984.

In 1985 Coyne played Laura in the STRATFORD FESTIVAL production of Tennessee Williams' The Glass Menagerie. She then appeared in 2 acclaimed TARRAGON THEATRE productions during its 1986-87 season - Aunt Dan and Lemon, for which she received a DORA AWARD nomination, and Michel TREMBLAY's Albertine, In Five Times, a production that toured Canada and went to Scotland's Edinburgh Festival.

Coyne returned to the Stratford Festival to join Robin PHILLIPS's Young Company in 1987-88; among her Young Company roles were those of Juliet in Romeo and Juliet (1987), Regan in King Lear (1988) and Olivia in Twelfth Night (1988).

She then worked extensively at the CITADEL THEATRE in Edmonton, appearing in a variety of plays ranging from Arthur Miller's The Crucible (1989) to Agatha Christie's The Mousetrap (1991). She also starred in A Midsummer Night's Dream (1989), She Stoops to Conquer (1993) and Chekhov's The Cherry Orchard (1995).

Back at Stratford, she played Portia in Marti Maraden's 1996 production of The Merchant of Venice. Her second Dora Award nomination came for her work in Jason SHERMAN's Patience (Tarragon Theatre, 1998) and a third for Sherman's An Acre of Time (Tarragon, 2001).

A founder of SOULPEPPER THEATRE COMPANY, Susan Coyne appeared in the landmark production of Don Carlos during the company's inaugural season in 1998. She featured in several other Soulpepper productions, including Platonov (1999), A Christmas Carol (2001), and A Chorus of Disapproval and The Winter's Tale (both 2002).

Her first play, Kingfisher Days (Tarragon, 2003), was an adaptation of her childhood memoir of the same name; Coyne played the roles of the five-year-old child and of the narrator. In her second play, Alice's Affair (Tarragon, 2005), Coyne examines the destructive effect a teacher has on a female student. She also starred in Carole FRÉCHETTE's Helen's Necklace at Tarragon in 2005.

Coyne was a co-writer/creator of and actor in the TV series Slings and Arrows, a satirical look at shenanigans behind a major Canadian theatre festival. She won 2 GEMINI AWARDS for writing and one for acting in Slings and Arrows. She has also adapted Chekhov's Three Sisters for the SHAW FESTIVAL and Platonov for Soulpepper.

A short film called How Are You? - a comedy about grief after a separation - was co-written and co-directed with Soulpepper colleague Martha BURNS and was an official selection of the 2008 Toronto International Film Festival.

A studious, flexible and intelligent performer, Coyne made a welcome return to the Toronto stage in 2010, playing the title role in Thistle Project's adaptation of Ibsen's Peer Gynt.

Susan Coyne is a board member of PEN Canada.