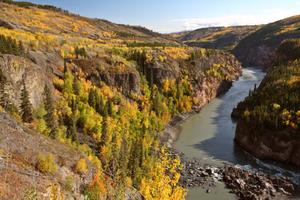 The Stikine River, 539 km long, rises in the Spatsizi Wilderness Park in northwestern British Columbia and flows in a wide arc north and west out of the Stikine Plateau uplands, then south through the spectacular Coast Mountains range to meet the Pacific Ocean near Wrangell, Alaska. It drains 49 800 km2, its largest tributary being the Iskut River. Separating the upper and lower sections of the river is the 90 km unnavigable Grand Canyon, where a precipitous narrow gorge has been cut through volcanic rock to a depth of 450 m. Stikine, meaning "the (great) river," is the name given by the Tlingit, who came upriver regularly to collect berries and catch and dry salmon in the arid climate east of the Coast Mountains, and also to trade with the Tahltan of the upper Stikine watershed.

In 1824 Samuel Black of the Hudson's Bay Company (HBC) crossed the headwater drainage of the Stikine. In 1838 Robert Campbell was sent by the HBC to open communication with its posts and shipping on the coast from the Mackenzie River, and was led by native guides to their great trading rendezvous at the Stikine-Tahltan confluence. Shortly afterwards the HBC acquired the Russian Fort Dionysius (now Wrangell) near the mouth of the Stikine. The discovery of gold near present-day Telegraph Creek in 1861 led to a minor gold rush and the establishment of a river steamer service. 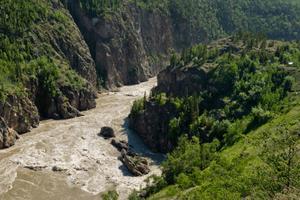 Since the advent of airplane and highway access to the North, the Stikine is no longer a major route. The people of Telegraph Creek - the only town on the river - who are mostly Tahltans, and the people of Wrangell rely heavily on the salmon that ascend as far up as the impenetrable Grand Canyon. Although development of minerals and timber resources around the river and a potential massive hydroelectric scheme in the canyon could at any time change the river drastically, it remains essentially a scenic wilderness waterway increasingly used for recreation.