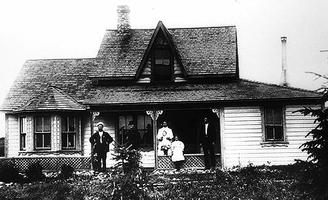 Stephán Gudmundsson Stephansson, Stefán Gudmundur Gudmundsson, poet, pioneer farmer (b at Kirkjuholl, Skagafjördur, Iceland 3 Oct 1853; d at Markerville, Alta 10 Aug 1927). Known as "the poet of the Rocky Mountains," Stephansson became the foremost west-Icelandic poet in Canada and one of Iceland's major poets. Although he wrote in Icelandic, his poetry reflects his love for Alberta, his concern with contemporary political issues and awareness of 20th-century thought as well as his Icelandic heritage. He lived at Kirkjuholl until 1862, at Vídimyrarsel until 1870 and at Myri in Bàrdardalur until he was 20. In 1873 he immigrated with his parents to Wisconsin and worked as a day labourer. Later he claimed land in Shawano County and worked as a farmer and logger. He moved to North Dakota in 1880 and to Canada in 1889, homesteading and farming near Markerville, Alta, until his death. Largely self-educated, Stephansson took an active part in the social and cultural life of Icelandic Canadians, as well as writing prolifically and carrying on a large correspondence. He was a romantic realist and satirist, known for his pacifism and interest in women's rights. His poems were published in west-Icelandic magazines after 1890. His published books are Uti a Vídavangi (poems, 1894); A Ferd og Flugi (poems, 1900); his collected poems Andvökur I-VI (1909-38); Kolbeinslag (poetry, 1914); Heimleidis (poems from his 1917 visit to Iceland); Vígslodi (antiwar poem, 1920) and his collected letters and essays, Bréf og Ritgerdir I-IV (1938-48). His own essays are an excellent source of information on his life and writing.