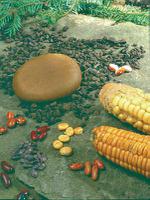 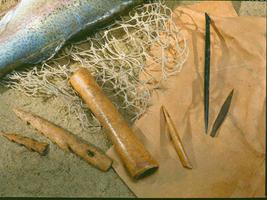 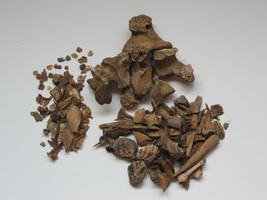 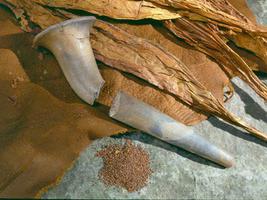 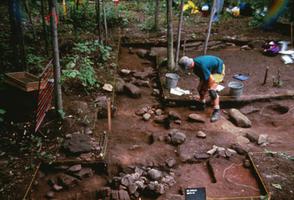 A section of the occupation floor of a longhouse at the McDonald site is exposed and reveals complex structures, including food storage or refuse pits and hearths (courtesy MRC du Haut-Saint-Laurent; photo Michel Gagné) 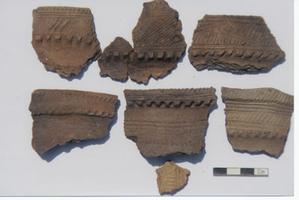 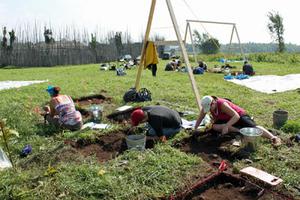 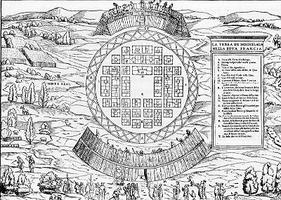 In Giovanni Battista Ramusio's work, Jacques Cartier and his men are shown being welcomed at the entrance of the village of Hochelaga (courtesy Library and Archives Canada/NMC-1908).

The St Lawrence Iroquoians form a group of nations that occupied, between 1200 and 1600 AD, a vast territory stretching along the St Lawrence River from the mouth of Lake Ontario to downstream from Québec City. They are part of the Iroquoian language family, which includes several distinct cultural communities sharing similar languages and sedentary lifestyles. At the time of contact with early European explorers, the Iroquoian language family consisted of 12 major groups: Huron-Wendat, Chonnonton, Petun, Erie, Seneca, Cayuga, Onondaga, Oneida, Mohawk, Susquehannock, Wenro (or Wenrohronon) and St Lawrence Iroquoian; these lived in the areas that are now southern and central Ontario and Québec and in the State of New York.

The St Lawrence Iroquoians were horticulturalists who lived in villages located on slopes and terraces away from the St Lawrence River. These villages were usually near a small stream and often by a swamp. They included several rectangular longhouses measuring about 30 metres long by 5 metres wide and 7 metres high. The frame was made of bent poles, tied together with hemp ropes and driven into the ground. The arched roof and the sides of the houses were covered with large slabs of cedar or fir bark, and sometimes elm. Several hearths ran along a central corridor, with a single fireplace shared by two families, and sleeping benches were set up above the ground on each side. Doors were located at each end of the houses. Each longhouse sheltered individuals belonging to the same maternal clan. Therefore, in a given house, men came from different clans than women. The oldest Iroquoian village ever discovered in Québec is the Mcdonald Site from around 1320 AD, and the largest is Droulers-Tsiionhikwatha that probably sheltered around 600 individuals; both are located in southwest Québec, in the St-Anicet area.

The seasons greatly influenced the intensity of activities within the village. The men were away for hunting and fishing mostly in the spring and fall, while the summer and fall were mainly dedicating to planting, maintaining the fields, harvesting and berry gathering, activities that were mostly conducted by women and children. Therefore, social life at the village was most intense in winter, between November and March. This was also the time when the accumulated surplus of corn was of upmost importance.

Horticultural Production
Apart from the preliminary preparation of the land for cultivation, horticultural production was largely carried out by women in areas most often located near the village. First, the forest was partially burned to clear the fields, which were then prepared for sowing with a simple stick used to dig a hole and bury the seeds. It took on average one acre of cultivated land to meet the yearly needs of an individual. The St Lawrence Iroquoians also cultivated other crops such as bean, squash and sunflower as well as tobacco, but hunting and fishing remained important subsistence activities.

Three different methods were used to preserve corn: indoor drying, partially roasting the cobs, and placing the grains in bark-lined storage pits located within the houses. At its peak (circa 1500 AD) horticulture accounted for about 75% of the diet. Nevertheless, without the use of fertilizer the land became rapidly exhausted and consequently, the Iroquoians were forced to move the location of the fields regularly. The cultivated areas thus became increasingly remote from the villages, which were eventually relocated within less than 20 years. Other factors that contributed to the necessity to move the villages include the depletion of game in the village areas due to intensive hunting and the deterioration of the houses, which required constant repairs.

The division of labour was present at all levels of Iroquoian society, including in the fabrication of items. The men manufactured bone and stone hunting tools, wooden utensils, fishing nets woven in hemp, wood and bone agricultural implements, and clay pipes. The women, for their part, made clothing decorated with beads or porcupine quills, leather moccasins, wicker baskets, ceremonial necklaces adorned with clay or stone beads and, most especially, vessels made of clay used for cooking or storing food and carefully decorated with geometric figures. Generally, it was the senior woman who put her artistic signature on the household's artistic production.

Disappearance of the St Lawrence Iroquoians

In the late 16th century the St Lawrence Iroquoians mysteriously disappeared, abandoning their former territories sometime between the last voyage of the French explorer Jacques Cartier in 1541, and the subsequent expedition of Samuel de Champlain in 1603. In fact, except for a few pieces of scattered information, very little is known about the fate of the St Lawrence Iroquoians. Researchers have different theories or use a combination of factors to explain the departure of these groups from the St Lawrence Valley. It is likely that the main causes were the impact of diseases transmitted by Europeans, wars of conquest initiated by outside groups (the Huron or Five Nations Iroquois: Mohawk, Cayuga, Onondaga, Oneida and Seneca), and the control of trade routes with Europeans. To this day, however, none of these hypotheses has been truly validated.