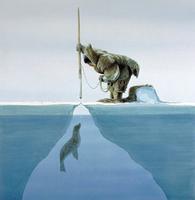 In the traditional waiting method of the Inuit, the hunter waits patiently at the breathing hole for the seal to appear (artwork by Gordon Miller).

Thirteen species of seals, fur seals, sea lions and walrus inhabit the waters surrounding continental North America. Most of these may be found in Canadian waters for at least part of each year. Here, they have long provided humans with sources of food, clothing and fuel.

Archaeological evidence indicates that seals have been used by the indigenous peoples of eastern Canada for at least 4000 years. A number of species are still hunted, including ringed seals (Phoca hispida), bearded seals (Erignathus barbatus) and walrus (Odobenus rosmarus) in coastal regions of the Canadian Arctic.

When most people think of sealing, they typically think of Canada's East Coast seal hunt. As soon as the first Europeans arrived in the New World , they began hunting seals. Beginning early in the 16th century, a succession of Portuguese and French merchants, Spanish Basques, and French and British colonists exploited the walrus population living along the north shore of the St. Lawrence River and in the Gulf of St Lawrence for their valuable oil, ivory tusks and leather. Exploitation was relentless and the last walrus was seen in the Gulf in 1800. In 1987 this walrus population was listed as "extirpated" by the Committee on the Status of Endangered Wildlife in Canada (see Endangered Animals).

Grey seals (Halichoerus grypus) were the next species hunted for their oil. By 1790 there was a year-round hunt on the Magdalen Islands and, by 1860, the species had been wiped out over much of its former range. As recently as the late 1940s grey seals were thought to be extinct in eastern Canada. Some animals survived, however, and the 1993 population size was estimated to be 143 500, increasing at about 8% per year.

Atlantic harbour seals (Phoca vitulina) were also hunted but because of their small size, low oil yield and scattered distribution, they largely escaped commercial exploitation. Nonetheless, settlers killed them for food, household oil and leather for boots and clothing. The species survives in Atlantic Canada today, scattered over much of its former range. The most recent estimate of its population size - from the 1970s - was 12 700 animals.

By the mid-17th century, French settlers began hunting harp seals (Phoca groenlandica) feeding in the St Lawrence River estuary during winter. Initially, the animals were shot from small boats but before long, the settlers adopted the more efficient methods of the local Inuit, and began to catch seals in nets. By 1720, a lucrative land-based net fishery existed along the St Lawrence River, up the Labrador coast to Hamilton Inlet and along the west coast of Newfoundland.

By the late 1700s, European demand for seal oil and skins led to the development of a commercial seal "fishery" based in Newfoundland. Since then - except for one year during World War II - a commercial seal hunt has taken place annually off Canada's East Coast and in the Gulf of St Lawrence. Two species are targeted: harp seals and hooded seals (Cystophora cristata).

At first, the hunt was carried out from small boats, but these were soon overshadowed by the introduction of larger "wooden-walled" sailing ships. The industry grew, bringing foreign investment and employing not only sealers but shipbuilders, carpenters, sailmasters and refiners who extracted the prized oil from seal blubber. Between 1818 and 1862 more people from more ports worked in the sealing industry than at any other time. In many years, landed catches exceeded 500 000 seals. The highest catches occurred in 1831, 1832 and 1844 when 680 000, 740 000, and 686 000 seals, respectively, were reportedly killed. The largest hunt, in terms of the numbers of ships and people involved, occurred in 1857, when over 370 ships carried 13 600 people to prosecute the seal fishery. During this time only the celebrated cod fishery was more important to the Newfoundland economy (see Fisheries).

Wooden sailing ships eventually gave way to those powered by steam (1863) and later to steel-hulled steamers (1906). The advantage of heavier motorized vessels lay in their speed and ease of handling and also in their ability to force a passage through ice. Despite such technological advances, seal catches declined. Years of overhunting had taken their toll and, on only two occasions, 1871 and 1876, did catches ever again exceed 500 000 animals.

By the late 19th century, production of petroleum and the availability of electricity cut the demand for seal oil. The industry continued to decline through the world wars (when sealing ships were claimed for other pursuits) and during the Depression. When Newfoundland joined Canada in 1949, its seal hunt became Canada's seal hunt. Markets reopened after WWII, when the hunt again became profitable, primarily because of demands for oil, fur and leather. By now, ships from Nova Scotia (owned by an expatriate Norwegian) and Norway had joined the offshore hunt. More than 400 000 seals were killed in the 1951 hunt and, between 1949 and 1961, an average of 310 000 seals were taken annually. Scientists later estimated that the northwestern Atlantic harp seal population declined, perhaps by more than 50%, between 1950 and 1970.

In 1965 Canada imposed a partial quota on its sealers operating in the Gulf of St Lawrence. Quotas for both harp and hooded seals were established for all sealers in 1971 and 1974, respectively. Harp seal catches, nonetheless, increased during the late 1970s to 1981, a year when over 200 000 harp seals were again landed. Hooded seal catches fluctuated from year to year, averaging 12 450 annually between 1970 to 1982. In 1983, however, the situation changed rapidly following the defeat of a proposal to list a number of northern seals - including harps and hoods - on Appendix II of the Convention on International Trade of Endangered Species (CITES). Later that year the European Community (now European Union) imposed an import ban on products derived from whitecoated harp seal pups and blueback hooded seal pups, which together had constituted most of the historical catch. In 1986, a Royal Commission on Seals and Sealing, established by the federal government in 1984, recommended that "The commercial hunting of the pups of harp seals (whitecoats) and hooded seals (bluebacks) is widely unacceptable to the public and should not be permitted." In 1987 the government implemented this recommendation and banned the large vessel commercial hunt for whitecoated harp seal pups and blueback hooded seal pups.

According to a Canadian government computer model, the northwestern Atlantic harp seal population has been increasing recently at about 5% per year and in 1994 numbered 4.8 million animals. There is, however, considerable uncertainty associated with these estimates and the government's own analyses indicate that the current quotas may cause the population to decline. The current status of the hooded seal population is even less certain.

Today, sealing continues to be a part of Canada's East coast fishing industry. Under Canadian law, seals are a federal responsibility under the jurisdiction of the Department of Fisheries and Oceans. The principle legal instrument governing their management is the Fisheries Act. In 1966 Seal Protection Regulations, established under the Act, first set down rules governing the seal hunt, including the issuance of sealing permits, annual seal quotas, and opening and closing dates for the hunt. In 1993 these regulations, along with those pertaining to other Canadian marine mammals, were consolidated into a single set of "Marine Mammal Regulations" (see Fisheries Policy).

Sealing issues beyond Canada's 200-nautical-mile (370 km) limit, which was established in 1977, come under the jurisdiction of the Northwest Atlantic Fisheries Organization (NAFO), which includes countries using major aquatic resources of the region. Inside the 200-mile limit, an industry-dominated Fisheries Resource Conservation Council (FRCC) now advises the Minister of Fisheries and Oceans on a variety of fishery issues including those involving seals (see Law of the Sea).

In the Canadian Arctic, settlement of native land claims has begun to formalize the "co-operative management" of marine resources including seals. Although the federal Minister of Fisheries still retains ultimate authority for the conservation of seal populations, native management boards are now involved in setting quotas and monitoring catches, developing regulations, carrying out population assessments and identifying research needs.

Since the early 1960s, intense opposition to the commercial seal hunt has arisen from both national and international groups. This is countered by the equally fierce desire of the sealers and their supporters to preserve not only a source of income but what they regard as their heritage. Regardless, harp and hooded seals are still potentially threatened by an inadequately regulated hunt and by environmental changes including biochemical contamination, climate change, and the search for and transportation of fossil fuels in the waters off eastern Canada. Although both species should theoretically be able to avoid highly contaminated areas, an oil spill could have serious consequences, particularly at breeding or whelping grounds or in northern waters, where biodegradation is slow and cleanup difficult. Depletion of many fish stocks in the northwest Atlantic, including species on which the seals depend, is another current threat.

Successful management of any future sealing activities like commercial fisheries will depend more on reason, caution and sound scientific knowledge than on emotion (on all sides of the issue), human overconfidence in our ability to predict the future, or political expediency.