Mi’k ai’stoowa, also known as Red Crow, warrior, peacemaker, Kainai (Blood) leader (born ca. 1830 near the junction of St. Mary’s and Oldman rivers, AB; died 28 August 1900 near the Belly River on the Kainai reserve, AB). Head chief of the Kainai, Mi’k ai’stoowa was a skilled negotiator and passionate advocate for his people. Mi’k ai’stoowa sought improved conditions for the Kainai in the wake of monumental changes amid the decline of the bison in traditional territories in the 1860s and 1870s, the encroachment of European settlers and the disastrous effects of smallpox epidemics.

Mi’k ai’stoowa, also known as Red Crow, warrior, peacemaker, Kainai (Blood) leader (born ca. 1830 near the junction of St. Mary’s and Oldman rivers, AB; died 28 August 1900 near the Belly River on the Kainai reserve, AB). Head chief of the Kainai, Mi’k ai’stoowa was a skilled negotiator and passionate advocate for his people. Mi’k ai’stoowa sought improved conditions for the Kainai in the wake of monumental changes amid the decline of the bison in traditional territories in the 1860s and 1870s, the encroachment of European settlers and the disastrous effects of smallpox epidemics. 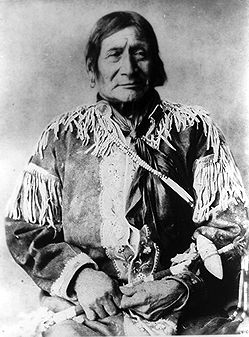 Mi’k ai’stoowa (Red Crow), the powerful chief of the Kainai, was one of the chiefs who signed Treaty 7.

Mi’k ai’stoowa (Red Crow) was born around 1830 near the confluence of the Oldman and St. Mary’s rivers, in the heart of the Kainai hunting grounds. The Kainai are members of the Siksikaitsitapi (Blackfoot Confederacy), who occupied the territory between the Red Deer River to the Belly River, though by the mid-19th century, they had moved further south into what is now present-day Alberta.

He earned his grown name, Mi’k ai’stoowa, when he first went to war. The 1840s and 1850s were a period of intense raiding among Indigenous peoples on the Plains. As a young warrior, he established a reputation of his own, killing at least five enemy warriors and participating in over 30 raids against the Crow, Cree,  Assiniboine, Shoshoni and Nez Percé. It is likely that he was involved in the 1865 attack against a woodcutter's camp in Montana.

In 1869 and 1870, smallpox took the lives of many chiefs. Mi’k ai’stoowa gained a reputation in his youth as a brave and strong warrior, and succeeded to the chieftainship of his branch of the Siksikaitsitapi in 1870 under the direction of members of the Kainai. Mi’k ai’stoowa claimed that he had never been struck in battle by an enemy, though he suffered trauma of his own making. After he killed his brother, Kit Fox, during an alcohol-fuelled argument, Mi’k ai’stoowa became an ardent believer in non-violence. He spent the last half of his life seeking to bring peace and stability to his people as they endured harsh changes brought about by the expansionist tendencies of the Canadian state.

Did You Know?
Mi'k ai'stoowa was known by many names, including Red Crow, Mékaisto, Mi’kasto, Captured the Gun Inside, Lately Gone, Sitting White Bull and John Mikahestow.

When the North-West Mounted Police (NWMP) arrived in 1874, Mi’k ai’stoowa (Red Crow) sought to engage with them on the basis of respect, eventually coming to have a peaceful relationship with this arm of the expanding Canadian government. Realizing that the decline of the bison herds and a rise in disease threatened his people, he joined with other members of the Siksikaitsitapi to sign Treaty 7, administered under the recently established Indian Act (1867), on the banks of the Bow River. (See also Numbered Treaties.) In return for relinquishing most of their territory and settling on reserves, Treaty 7 offered the Indigenous signatories — including the famed peacemaker and chief Isapo-muxika (Crowfoot) and other members of the Siksikaitsitapi, including the Piikuni and the Siksika — financial assistance and agricultural settlement instructions.

Mi’k ai’stoowa did not attach great significance to Treaty 7. The Kainai had no concept of a “reserve,” having travelled for millennia in the pursuit of the bison to the Rocky Mountains, “the backbone of the world,” in their eyes. The land and animals did not belong to the people — they were created by Napi (“Old Man,” Creator) when the world began and could not be “surrendered” to anyone. Despite this, Indigenous signatories of the treaty had doubts soon after it was signed. The NWMP failed to stop of the slaughter of remaining bison by American hunters. As the herds disappeared, Mi’k ai’stoowa looked ahead, accepting the reality that they were gone. While other chiefs clung to the old ways, Mi’k ai’stoowa persuaded the Indian commissioner to let his people move south to the Belly River to take up farming.

Mi’k ai’stoowa continued to battle with Canadian bureaucrats after signing Treaty 7. He was critical over rations, boundaries, encroachments on territory and the Canadian government’s broken promises. Mi’k ai’stoowa used diplomacy and patience to negotiate the reinstatement of the Sun Dance, after it was forbidden under Canadian law. Though the Sun Dance was not re-instated until 1951, his effort to save an important element of the Siksikaitsitapi culture from destruction was a hallmark of his life, and his contribution to Indigenous cultural and political freedom.

Mi’k ai’stoowa (Red Crow) crossed the Belly River for the last time on 28 August 1900. When he did not return, his wife, Sitting Before (also known as Longtime Singer), went looking for him and found him collapsed near the edge of the river.

Mi’k ai’stoowa identity was influenced by the tumultuous period in which he was born, which was a time of great uncertainty and change for Indigenous peoples in what would become the Canadian Prairies. With the decline of the fur trade in the 19th century, and the demise of the bison hunt, the Kainai and Siksikaitsitapi faced increasing pressures to adapt new modes of living and subsistence. When he settled on his reserve under the conditions of Treaty 7, Mi’k ai’stoowa  pursued self-sufficiency for his community by introducing ranching and by also stressing the importance of education. He remained a strong proponent of Indigenous culture and beliefs. In the wake of the disastrous effects of diseases and other external demands, he was a calm and wise leader who contributed to stability during a time of tremendous political and economic change.