The Kainai, also known as the Blood or Kainaiwa, are one of three nations comprising the Blackfoot Confederacy. (The other two include the Siksika and Piikani.) The Kainai have a land base of 1,342.9 km², bordered on all sides by the Oldman, St. Mary and Belly rivers in Alberta. According to the 2016 census, 1,000 people identified as having Kainai ancestry.

This entry provides a historical overview of the Kainai people; for more information about their reserve, society and culture, and modern community, please see Kainai Nation (Blood Tribe).

The Kainai, also known as the Blood or Kainaiwa, are one of three nations comprising the Blackfoot Confederacy. (The other two include the Siksika and Piikani.) The Kainai have a land base of 1,342.9 km², bordered on all sides by the Oldman, St. Mary and Belly rivers in Alberta. According to the 2016 census, 1,000 people identified as having Kainai ancestry. This entry provides a historical overview of the Kainai people; for more information about their reserve, society and culture, and modern community, please see Kainai Nation (Blood Tribe).

The Kainai once occupied hunting grounds from the Red Deer River to the Belly River in Alberta. They even ranged far into Montana, and the Kainai traded often with the American Fur Company. With the settlement of Europeans on their territory in the mid-1800s, the Kainai moved farther south to the regions around Pakowki Lake and the Belly and Teton rivers. (See also Indigenous Territory.) 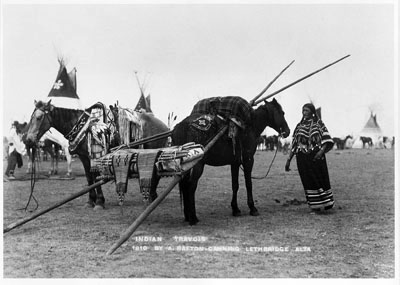 The Kainai were a bison-hunting culture, which relied heavily on the animal for food, shelter, clothing, domestic tools and weapons. They made pemmican out of bison meat, which was an important source of food during the winter when bison were scarce. Kainai men also hunted deer, moose, mountain sheep and other large game. Kainai women gathered berries and root vegetables in the summer months, which they used to supplement their diet. 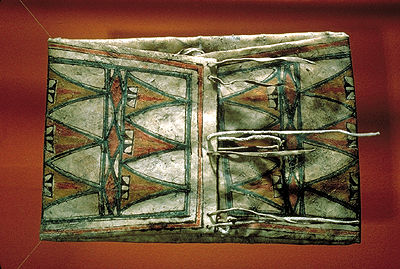 The Kainai had a reputation for being fierce warriors. Their enemies included the Cree, Ktunaxa, Shoshone and Crow nations. During periods of intense warfare among Indigenous peoples of the Northern Plains in the 1800s, male Kainai gained social prestige through acts of war. Archaeologists have found painted records of warrior feats and skills that were publicly displayed on tipis and warriors’ clothing. (See also Plains Indigenous Peoples in Canada.)

The Kainai held beliefs about the spirit world and afterlife akin to most other Indigenous Plains cultures. They used medicine bundles, performed sacred ceremonies such as the Sun Dance, and sought shamans for spiritual guidance and healing. (See also Religion and Spirituality of Indigenous Peoples in Canada.) 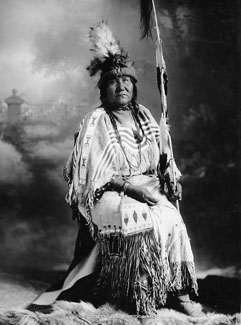 As in most Indigenous cultures, oral traditions preserved and transmitted cultural practices and stories about Kainai war victories, ceremonies and people. In 1960, the Kainai permitted the National Film Board of Canada to document their sacred Sun Dance, a sacred ceremony that tribal leaders believed was dying out. Today, the Kainai continue to celebrate certain cultural ceremonies, including powwows. (See also Siksikáí’powahsin: Blackfoot Language.)


Circle of the Sun, Colin Low, National Film Board of Canada

Did You Know?
Although stories differ, some Kainai believe that Kxa’khom (Mother Earth) is the source of all life. The Kainai themselves were born of her womb, symbolized by the dome-shaped sweat lodges in which they pray, purify their bodies and souls, and are essentially “reborn.” In death, the Kainai believe that their spirits leave their bodies and return to Kxa’khom, thereby participating in a cycle of regeneration.

Other Blackfoot oral traditions tell the story of the Creator (also known as Old Man or N’api), who was light personified, and considered the beginning of the day and the beginning of life. As in other Indigenous religions, the Creator is non-human and non-gendered. Old Man created and is eternally part of all the living people, creatures and life forms on the Earth.

During the 1700s, the Kainai traded with the Hudson’s Bay Company as well as with American traders. In addition to increasing warfare among Indigenous peoples, exposure to European diseases, such as smallpox and diphtheria, significantly reduced the Kainai population in the early- to mid-1800s. Whereas the pre-colonial Kainai population totalled approximately 2,500 to 3,500, it dropped as low as about 1,750 people after the 1837 smallpox epidemic. Despite significant population loss, the Blackfoot Confederacy remained one of the most powerful Indigenous groups on the Northern Plains, temporarily impeding the westward expansion of European settlers.

After the arrival of Catholic and Methodist missionaries in the late 1800s, Christianity became a common religion among the Kainai and Blackfoot Confederacy. While Christianity remains prevalent in these communities, traditional religious practices have survived.

In 1831, Kainai chief Bull Back Fat (also known as Buffalo Bull’s Back Fat or Bull’s Back Fat) made peace with the Americans, permitting them to open trading posts on the upper Missouri River. In 1855, Kainai chiefs, including Father of Many Children, Bull Back Fat and Seen From Afar signed a treaty on behalf of the Kainai with the Americans. In Canada, Seen From Afar's nephew Mi’k ai’stoowa (Red Crow) was the chief signer of Treaty 7 with the federal government in 1877. (See also Numbered Treaties.)

The Numbered Treaties created reserves that effectively put an end to intertribal warfare and traditional ways of life, such as the bison hunt. The Kainai participated in their last bison hunt in the winter of 1880–81. The Kainai and the rest of the Blackfoot Confederacy struggled to survive on reserves without the ability to hunt bison. Historians commonly refer to the winter of 1883–84 as the “starvation winter” because of the widespread hunger that plagued the Confederacy that season.

Initially, the Kainai were given a reserve adjacent to the Siksika on the Bow River. In the 1880s, they moved to a new site between the St. Mary and Belly rivers, where they established the largest reserve in Canada. In the 1890s, the Kainai launched a successful ranching industry. (See also Ranching History.) After the turn of the century, they became large-scale farmers.

Did You Know?
In 2014, the Kainai joined other First Nations in signing the Iinii Treaty or Buffalo Treaty, including: the Blackfeet Nation, Siksika Nation, Piikani Nation, Assiniboine and Gros Ventre Tribes of Fort Belknap Reservation, Assiniboine and Dakota (Sioux) Tribes of Fort Peck Reservation, Confederated Salish and Kootenai Tribes (see also Coast and Interior Salish), and the Tsuut’ina Nation. In 2015, the Stoney Nakoda Nation and the Samson Cree Nation also signed. Among other issues, the signatories agreed to unite the political power of Northern Plains Indigenous nations, work towards bison conservation and strengthen traditional relationships to the land.

Today, the Kainai Nation is involved in a variety of economic, agricultural and educational programs aimed at preserving their territory, culture and environment, as well as promoting Kainai businesses. For more on the Kainai reserve and modern community, please see Kainai Nation (Blood Tribe).