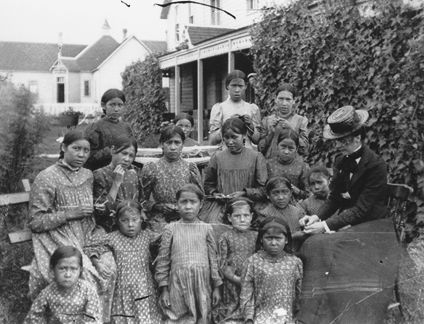 The reserve system is governed by the Indian Act and relates to ​First Nations​ bands and people, referred to in a legal context as Indians. Inuit and Métis people normally do not live on reserves, though many live in communities that are governed by ​land claims​ or self-government agreements. (See also ​Métis Settlements​).

Under the Indian Act, an Indian Reserve is land held by the Crown “for the use and benefit of the respective bands for which they were set apart” under treaties or other agreements. Many First Nations (Indian Bands) include several separate portions of land as their reserve. Only those with Registered Indian status (i.e., Status Indians), may ‘own’ land on a reserve, though such ownership remains at the discretion of the ​federal government​, and does not entail full legal possession. Certificates of Possession, often referred to as CPs, convey “ownership” of reserve lands to their holders but they lack the legal status of deeds. Furthermore, not all bands have reserves. The Caldwell First Nation in Ontario does not have a reserve, nor do several bands in Newfoundland.

In 2016, 744,855 people identified as ​First Nations​ with Indian Status, 44.2 per cent of which lived on reserves. In 2016, ​Statistics Canada​ reported population growth both on reserve (an increase of 12.8 per cent) and off reserve (49.1 per cent). The census definition of “on reserve” includes Indian reserves, Indian settlements (excepting five Yukon settlements), Indian government districts, terres réservées aux Cris, terres réservées aux Naskapis, Nisga’a land and the village of Sandy Bay, Saskatchewan.

Reserve residents are normally members of the Band where they reside. Many communities prefer the term First Nation rather than band in self-reference, however band is the term used by the federal government to describe “a body of Indians” in a community, residing on one or more reserves. In 1982 there were 577 bands in Canada and by 2016 the number had gradually grown to 618, representing more than 50 nations. A majority of bands in Canada have fewer than 1,000 members.

Prior to an amendment to the ​Indian Act​ in 1985 (Bill C-31), Registered Indian status automatically guaranteed membership in a band. After 1985, people without status were permitted to reside on reserves at the discretion of band councils. In addition, sometimes people with neither status nor band membership are permitted to live on reserve land.

Two of the largest band membership reserves in Canada are the Six Nations of the Grand River, near Brantford, Ontario, and the Mohawks of Akwesasne, who live near Cornwall, Ontario, in a territory that straddles the borders of Ontario, Quebec and New York. (See also Haudenosaunee.)

In the ​Northwest Territories​, Nunavut and the Yukon, where few reserves have been established, the bands have been gathered into communities known as settlements, which are generally on Crown land, but these bands and settlements do not have reserve status. There are reserves in most parts of southern Canada, but about half of on reserve communities are in areas designated “rural” or “remote.”

The earliest reserves in Canada appear to have been established on seigneurial holdings by Catholic missionary orders and private persons in New France. Reserves like Sillery, established in 1637, were a means of imposing a sedentary lifestyle on previously semi-nomadic peoples like the Innu and Algonquin in order to convert them to Catholicism. The practice of forcing ​Indigenous peoples​ to live amongst French settlers, in the hopes that this would lead to conversions, led to the French Crown granting lands for reserves at Kahnawake and St. Regis, Kanesatake, Odanak, Lorette and Becancour for the use of Haudenosaunee (Iroquois) peoples. The French and Haudenosaunee established a ​Great Peace in 1701​, which was meant to strengthen peace between the nations of the Haudenosaunee Confederacy and with the French Crown.

Subsequent British colonials were less interested in establishing reserves. Rather, they attempted to establish political and economic alliances to enhance their position in the booming fur trade. However, tensions mounted in the face of the rapid westward expansion of settlers under colonial officials less interested in following Crown directives than securing land for themselves and other settlers. The Royal Proclamations of 1761 and 1763 were therefore issued by King George III to ease these tensions. Improving on the 1761 proclamation, the Royal Proclamation of 1763 declared all land west of the Appalachian Mountains to be the exclusive domain of Indigenous peoples, and required treaty negotiations if such land were to be surrendered.

In ​Atlantic Canada​, though east of the Appalachians, colonial officials created reserves, despite the Proclamation not requiring it. Rather than through treaties, officials created reserves through orders-in-council, or through the purchase of private lands for Indigenous settlement. However, the unregulated nature of these transactions meant that areas like ​Prince Edward Island​ and Newfoundland were established without recognition of Aboriginal title. In the case of Newfoundland, such title was not recognized until 1987, when the Conne River Mi’kmaq were granted reserve status. (See also ​Reserves in Nova Scotia​.)

In Quebec, colonial officials ignored the Proclamation’s requirements, settling reserve claims as necessary to coincide with settlement or disputed boundaries. The ​James Bay and Northern Québec Agreement of 1975 marked a new era of ​modern treaty​ negotiation. In northern Quebec, many Inuit and Cree settlements enjoy legislative protection and self-governance.

In Ontario, colonial officials attempted to follow the Proclamation, but after agreements were made, rapid settlement eroded Aboriginal title and rights. Eventually this resulted in agreements and acts that all but denied Indigenous people title and land rights.

In ​British Columbia​, aggressive expansion and disinterest in treaty negotiation led to rapid appropriation and segregation, with colonial officials enacting changes unilaterally and without consultation. As such, land claim negotiations in British Columbia have been long and complex, resulting in a number of positive settlements of appropriated land. (See also ​Nisga’a Land Treaty – Feature Article​.)

In the Prairie provinces, multiple treaties were negotiated in the late 19th century. (See also ​Numbered Treaties​.) Some scholars contend that these negotiations were intended to reflect reciprocal relationships; however, this was soon forgotten, as rapid settlement and policies of both assimilation and segregation took over.

In the territories, some treaties from the Prairies overlapped, resulting in some small reserves. By and large, there are few reserves in the territories; rather there are Métis or Inuit settlements and communities.

The Indian Act of 1876 codified the methods through which Indian Status and reserves were governed by the ​federal government​. Immensely problematic, the Act has been amended several times to remove discriminatory policies, but is still an imperfect document. The nature of the reserve system, in that its creation involved agreements to forfeit land and rights that were not always honoured, understood or properly elucidated, means that reserves are often the focus of land claim disputes and considerable animosity over settler encroachment. (See also Oka Crisis.)

Land claim settlements in many provinces and territories, and Treaty Land Entitlement negotiations in Saskatchewan and Alberta, have increased the overall size of many reserves and territories. The numerous land claims (both specific and comprehensive) by ​Indigenous peoples​ against the federal government indicate the degree to which ​traditional lands​ were either unfairly taken, or promised but never delivered. Indeed, many Indigenous lands across the country are not protected by reserve status.

The Indian Act stipulates that only registered band members may reside permanently on a reserve unless the band has adopted a residency bylaw that regulates the right to live on the reserve. Reserve bylaws only apply within the boundaries of the reserve, although most provincial laws apply to the residents of the reserve. Generally, provincial or territorial laws govern all residents of that province or territory, on and off a reserve, though certain powers — like the ability to regulate rent, marriage, tobacco and gaming — have been and continue to be challenged. In 2017, according to the ​federal government​, 229 bands controlled their own membership, while a further 38 control membership under self-government legislation.

Many bands have leased or otherwise disposed of portions of their reserve lands to non-Indigenous people for various purposes including ​natural resource​ development, rights of way for transportation or transmission, farming, ranching and recreational land use. Within the reserve, the band may lease the land and use it to develop economic opportunities for band members.

Although some Registered Indians may believe that reserves are legally their property, the Indian Act states that the title to reserves is vested with the Crown. This legal relationship with the federal government is a matter of concern as there are some who believe that the status of reserve lands is in jeopardy as long as legal title remains outside their control. The Indian Act forbids the “surrender” and sale of reserve land by anyone who holds a Certificate of Possession or a band to anyone other than the Crown.

Holders of Certificates of Possession referred to as a “locate,” may be transferred among members of the same band. Land in a reserve that is not assigned to individuals is held as community property for the benefit of the entire band.

Increasingly, federal and provincial social policies in the areas of health, economic development and education have resulted in new and expansive services on many reserves. Increased services have led to new employment and economic opportunities, which have stimulated interest by reserve residents in training and post-secondary education options. (See also ​Education of Indigenous Peoples in Canada​.) For example, the ​James Bay and Northern Québec Agreement​ has enabled the ​James Bay​ Cree in northern Quebec to develop a social and civil infrastructure for their nine communities and the Cree regional government.

The development and evolution of similar infrastructure for reserves will enable many reserve residents to achieve economic and social standards that were previously considered unattainable. Other reserves throughout Canada are also undertaking economic development of their lands or surrounding territory. Notable examples include the Osoyoos and West Bank First Nations in British Columbia, the Wendake First Nation in Quebec, the Membertou First Nation in ​Nova Scotia​, and the Siksika and Enoch First Nations in Alberta.

To many Registered Indians whether on or off reserve residents, reserves represent the last tangible evidence that they are the original people of Canada. Reserves nurture a sense of history and culture where ​Indigenous language​s, ​spiritual beliefs​ and values are shared. Although conditions of extreme poverty, poor health, insufficient housing, and impoverished social and health services still exist in many reserves, the reserve and the traditional values, and the kinship affiliation it nurtures contribute to their members’ sense of identity and sense of self. For many Registered Indians and those without legal status, the reserve is a physical and spiritual home, despite the privations that may exist therein.

Reserves have often been labelled rural ghettos or retreats by critics who view them as areas where their members can escape the demands of modern society. People who perceive reserves in this way may believe that without reserves First Nations would be forced to assimilate into Canadian society, eliminating many of the problems that affect reserve populations. This view ignores the political and legal status that reserves have in Canada and overlooks the fact that ​First Nations​ may not want to be assimilated. It also ignores the situation in the ​Northwest Territories​, the Yukon and northern Quebec, where Registered Indians who do not live on reserves still maintain their unique identity, language and culture.