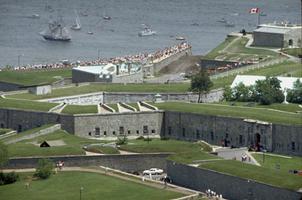 In the 1870s, Governor General Lord Dufferin persuaded the city not to demolish the fortifications, thus defining the historic character - and tourist potential - of old Québec (courtesy National Defence).

Québec Citadel National Historic Site commemorates a military fortification built by the British from 1820-31 in Québec City. According to a number of 19th-century authors including Charles Dickens, the Citadel, which crowns a 100 m escarpment named Cap-Diamant, made the city the "Gibraltar of North America." It was built when Québec City was Canada's main port, and its purpose was to protect the city from attack from the St Lawrence River below and from the Plains of Abraham to the west. The fortress could also serve as a last refuge for the garrison if the city was captured by an enterprising enemy.

The Citadel has been an active military base since 1920. The Historic Sites and Monuments Board of Canada designated the uneven star-shaped Citadel as a national historic site in 1946 but its importance was recognized much earlier, and it was one of Canada's first heritage conservation projects. The Citadel comprises 4 bastions, or wall projections, and 3 straight curtain walls, all constructed with locally-quarried sandstone. Within its walls are 24 buildings, including one of the 2 official residences of the Governor General (originally occupied by British garrison officers), the Royal 22e Régiment Headquarters (a former hospital), Dalhousie Gate, an officers' mess and a museum. The buildings are constructed mostly of grey cut stone. The fortifications of Québec were one of the reasons why Québec's Historic District was placed on the UNESCO World Heritage Site list in 1985. Visitors are allowed in the Citadel but must be accompanied by a guide before entering in through Dalhousie Gate.

The Citadel replaced or incorporated defence works built during the French regime, eg, the western rampart (still in existence opposite the National Assembly). After the Conquest, 1759-60, the British considered this rampart inadequate but were more concerned with what was happening in Europe than in Lower Canada. With rising tensions between Britain and the United States, the British began to protect their interests in the interior of British North America by implementing a plan developed by Gother Mann in the 1790s. The present ramparts, encircling the Upper Town cliff, and 4 Martello Towers on the Plains of Abraham, were completed before the outbreak of the War of 1812. The Citadel, the principle element of Mann's plan, was not built for it was too large and costly. Its construction began after the war because the British military felt peace was tenuous and Québec City would be the primary goal of any invasion.

Designed by British engineers on a classical model, the Citadel was somewhat anachronistic, given the recent evolution of European military architecture. It was begun in 1820 and completed in 1831, except for a few service buildings which were completed in 1850. The garrison provided most of the labour. Although the Citadel was designed as an arms, munitions and supplies depot as well as a barracks, only part of the 1000-man garrison was lodged there. Soldiers were also billeted in Artillery Park and in the Jesuit Barracks (the site of the present city hall).

After the mid-19th century, improvements in weaponry, particularly the introduction in 1856 of more precise and longer-range rifled artillery, led the British military authorities to modify their defence system substantially. Military fortifications were then located farther from the city centre. During the American Civil War, the threat of an American invasion encouraged the military to construct 3 forts between 1865 and 1871 on the heights of Pointe-Lévis across the river from Québec. None of these structures was ever subject to assault (other than by tourists).

The British military departed Québec in 1871. The Citadel served as headquarters for one of the artillery schools of the Canadian Army and became the headquarters of the Royal 22e Régiment after World War I. Lord Dufferin was the first governor general to make the Citadel a vice-regal residence (1872). It was Dufferin who persuaded local politicians to save the old French walls from destruction although his plan also included some modifications such as extending the Durham Terrace to the Citadel (1879) and constructing a road around the fortress.