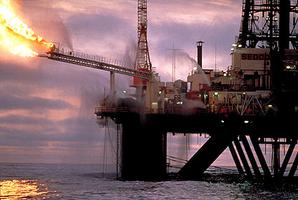 Petroleum demand reflects energy use in society and is usually forecast by projecting recent trends in economic growth, energy consumption, petroleum technology and prices. The supply of petroleum available to meet those demands depends on 2 factors: reserves in the ground and the productivity of those reserves. The total in-place reserves of crude oil, natural gas or bitumen are less important than the recoverable reserves. "Proved" reserves are the estimated quantities that analysis of geological and engineering data demonstrates, with reasonable certainty, to be economically recoverable from known reservoirs, under existing economic and operating conditions. They increase as new discoveries are made, concurrently decreasing as they are exploited.

"Unproved" reserves are estimated quantities that might be economically recoverable from known deposits but with a lower degree of certainty. A less certain category is "speculative" reserves, which are not yet discovered but which general geological and engineering judgement suggests might eventually be found or might become economically recoverable. The sum of proved, unproved and speculative reserves is termed "future potential recovery" and, when added to cumulative production, results in estimates of "ultimate potential recovery." "Productivity" is the estimate of the maximum practical rate at which oil or gas can be produced, having regard to existing proved reserves and facilities, the rate at which proved reserves will grow and new facilities be installed, and economic, political and other factors.

Oil reserves are classified as "conventional" if the oil is produced through well bores by ordinary production methods. "Synthetic" oil results, for example, from upgrading bitumen or from coal liquefaction. Production of conventional Canadian oil has exceeded the rate of additions to proved reserves since the early 1970s. Consequently, proved reserves have declined to some 800 million m3. Some 2100 million m3 have been produced to date indicating an initial proved reserve of some 2900 million m3. This is about one-quarter of the 10-14 billion m3 that most authorities consider to be Canada's ultimate potential recovery. Canadian synthetic oil currently comes from bitumen recovered from the Alberta oil sands. Some authorities restrict proved reserves of synthetic oil to production that is recoverable during the reasonable producing life of existing facilities. Other estimates include all volumes of synthetic oil recoverable from oil sands considered economically attractive for development. Thus, synthetic-oil proved reserves estimates range from some 230 to 3900 million m3. The ultimate potential recovery of synthetic oil is difficult to speculate about because huge deposits exist although only a small fraction is being developed. Ultimate potential recovery will depend on future technology and the economics of recovering and upgrading bitumen to synthetic oil. Estimates currently range from 1 billion m3 to 40 billion m3.

In Canada growth in proved reserves of natural gas has for many years exceeded the rate of production, but the current very large North American gas surplus has reduced drilling for gas and reversed that trend for the years 1983-86. Proved reserves are currently some 2400 billion m3 and, when coupled with production to date, indicate initial proved reserves of some 4000 billion m3. Estimates of ultimate potential recovery for natural gas in Canada range from some 12 to 15 trillion m3. For both natural gas and conventional oil, a major portion of Canada's future potential recovery is expected from frontier regions, such as the Beaufort Sea and the eastern Continental Shelf. Most proved reserves are in the Western Canada Sedimentary Basin, the source of current production.

Canada's total productivity of conventional and synthetic oil has declined over the past decade to some 220 000 m3 per day. The collapse of oil prices during 1986 from $30 US to $10 and back to $18 has created much uncertainty, although prices are expected to rise in the 1990s. Productivity is thus expected to decline during the late 1980s, then return to almost current levels by the mid-1990s. Natural-gas production has increased somewhat over the past decade but is much lower than existing productivity, which, in turn, is expected to grow in future.

Canadian per-capita demands for oil and natural gas have been among the highest in the world (see energy in society). This rate partly results from Canada's severe climate, but also from its high standard of living and the relatively low energy prices that prevailed until the 1970s. Canadian requirements for oil products, which include conventional and synthetic oil and condensate (a gas by-product and oil substitute), increased steadily through most of the early 1970s but recently declined as a result of conservation measures, slower economic growth and higher petroleum prices. The decline is expected to continue during the next decade with demand dropping from a current level of some 250 000 m3/day to about 230 000 m3/day by the mid-1990s. Demand for natural gas over the same period has generally increased, but lower oil prices and the resulting competition will likely eliminate growth through the late 1980s. Most authorities expect the price advantage for gas to be restored and forecast a substantial growth in future, from 160 million m3/day to 200 million m3/day by the mid-1990s.

Domestic sources have supplied most of Canada's oil and natural gas, although Canada was a net importer of oil from about 1975 to 1983. Net exports now amount to about 10% of total production. All gas requirements have been met with Canadian production. Most of Canada's oil exports are heavy oil, for which there is not sufficient Canadian refinery capacity or markets located near sources of supply. Total oil productivity is expected to decline to less than Canadian demand within a few years and remain there throughout the next decade. The shortfall, which would have to be made up by imports, could range from 50 000 to 100 000 m3/day by 1995. Gas productivity is expected to continue to exceed demand, leaving a surplus for possible export. Imports and exports of oil and natural gas are a function of Canadian demand, available productivity and government energy policy. Oil imports have come predominantly from Venezuela and Saudi Arabia, and natural-gas surpluses have been exported to the US.