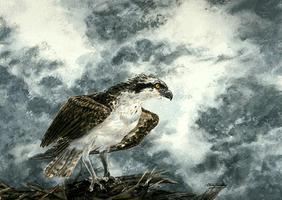 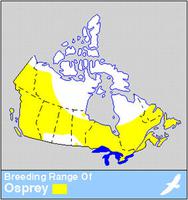 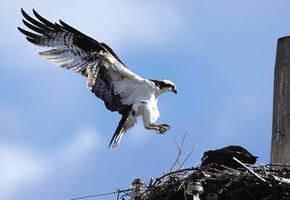 The osprey (Pandion haliaetus) is a large, cosmopolitan bird of prey characterized by a crested head and contrasting black, white and grey plumage.

The osprey feeds exclusively on fish and is commonly called a fish hawk. Adaptations for fishing include nostrils that close, feet designed with sharp spicules (small spines) on the underside, and a reversible outer toe, for catching and holding quarry. Although frequently accused of feeding on sport fish, ospreys feed mainly on nongame fish found near the surface or in shallow water.

Ospreys breed across Canada except in polar and subpolar regions, building large stick nests near or over water. Early each fall they migrate to South America.