Norway House, Manitoba, consists of two closely related communities along Little Playgreen Lake and the east channel of the Nelson River, 30 km north of Lake Winnipeg and 460 km north of Winnipeg. The Norway House Indian Reserve, population 4758 (2011c), with Rossville as its centre, is under the jurisdiction of the federal Ministry of Aboriginal Affairs and Northern Development, as well as an elected band chief and council. Since 1970 the non-reserve community (population 308, 2011c) has been recognized under the Northern Affairs Act. It is governed by a mayor and councillors. 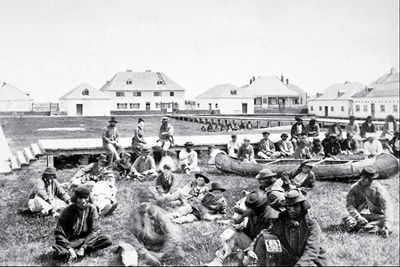 Located at the junction of several water routes, screened by a rocky shoulder from Little Playgreen Lake, Norway House was a hub of the Hudson's Bay Company's fur-trade and supply lines, and an administrative centre for Rupert's Land. Three HBC posts (Jack River, 1796-1817; Norway House I, 1814-24; Norway House II, from 1827) were built in the area, the last being at the site of the present community.

Named after Norwegian axemen who were hired to open land communications from York Factory, Norway House was known for its fishing and hunting and for the production of York Boats. Settlers from the Red River Colony found temporary refuge here in 1815 and 1816-17 after they were attacked by forces of the rival North West Company. Reverend James Evans, a Methodist, established a mission nearby in 1840 with 2 native associates. By the late 1870s, Norway House's importance as a transshipment point was waning. Between 1930 and 1970, the HBC demolished most of their buildings. Now only the warehouse (1840-41), jail (1855-56) and part of the powder magazine (1837-38) survive. Commercial fishing, services and trapping are the mainstays of the local economy.