Mes Aïeux is a musical group that was formed in Montreal in 1996. Its members are Stéphane Archambault (vocals), Marie-Hélène Fortin (vocals, violin, and tambourine), Éric Desranleau (vocals, guitar, bass, flute and drums), Frédéric Giroux (vocals, guitar, bass, and harmonica), Marc-André Paquet (drums, percussion, bass, and vocals), Benoît Archambault (voice, keyboard, trumpet, and guitar) and Luc Lemire (saxophone, percussion, and vocals). Their music, which they describe as folk-inspired pop, often evokes the traditional tales and legends of Quebec. The songs of Mes Aïeux, with their elaborate arrangements, have a very contemporary, theatrical feeling. 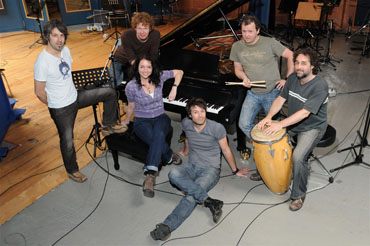 In 2000, Mes Aïeux released their first album, Ça parle au diable!, on the Disques Victoire label. It was nominated for the Félix Award for Traditional Album of the Year in 2001 and received praise from the critics despite its almost total lack of airplay on commercial radio.

In 2001, the group released its second album, Entre les branches, which earned them Félix nominations for Traditional Album of the Year and Group of the Year in 2002.

The group’s next album, En famille, came out in 2004 and earned them their first Félix Award, for Contemporary Folk Album of the Year, as well as a Félix nomination for Group of the Year, in 2005. The group’s albums also earned three Music Canada certifications in November 2005: platinum (100,000 copies sold) for En famille, gold (50,000 copies sold) for Entre les branches and another gold for their first album, Ça parle au diable!

In December 2006, En famille went double platinum (200,000 copies sold), and Mes Aïeux enjoyed phenomenal success on traditional radio stations with their song “Dégénérations / Le reel du fossé”. It was voted French-language song of the year by listeners of the Bell Media-owned ÉNERGIE radio network, in the largest annual radio listeners’ choice competition in Canada. This song portrays the yawning void between Quebec’s past generations and its youth of today—their sense that their values have deteriorated and that they are powerless to tap into their own ancestral roots.

Also in 2006, Mes Aïeux released a live concert album entitled Tire-toi une bûche. It included the songs “La Corrida de la Corriveau” (La Corriveau is an important figure in Quebec folklore) and “En vérité”, which deals with a character named Ti-Jean’s quest for truth and is adapted from an oral story gathered by French author Jean-Claude Carrière. Tire-toi une bûche went gold only three weeks after its release, and went platinum in January 2007.

Following this success, Mes Aïeux was in heavy demand and began touring. In summer 2007, the group played on the summer festival circuit in Europe, including stops in France and a performance at the Francofolies festival in Spa, Belgium.

In 2008, Mes Aïeux performed their big hit, “Dégénérations” with Céline Dion on the Plains of Abraham as part of the celebrations of the 400th anniversary of Quebec City. In October, the group released its fifth album, La ligne orange, which had a cover illustrated by well known Quebec cartoonist Michel Rabagliati (see French Comic Strips) and included a song about the legendary Quebec strongman, professional wrestler and actor The Great Antonio. In November 2008, the song “Dégénérations”, from their preceding album, was included in SOCAN’s list of the 10 French-language songs that received the most airplay on Quebec radio stations in 2007.

In summer 2009, Canadian astronaut Julie Payette took a copy of La ligne orange along with her into space, and the album went platinum. In 2009, Mes Aïeux was nominated for Félix Awards in five categories and won in three of them--Group of the Year (Audience Choice), and Album Cover of the Year and Contemporary Folk Album of the Year, both for La ligne orange. In 2010, the group performed as part of the cultural festivities at the Winter Olympic Games in Vancouver. The following fall, in November 2010, Mes Aïeux won a SOCAN award for the song “Le déni de l’évidence”, one of the ten French-language songs that received the most airplay on Quebec radio stations. In 2011, aside from a high-profile appearance on the televised celebrations of the Fête nationale du Québec (Saint-Jean-Baptiste Day), the group took a break from performing to work on its upcoming album.

Mes Aïeux received several more Félix nominations in 2013 and won the Félix Award for Group of the Year for the second year in a row. After several months of touring, the group took a multi-year break, during which Stéphane Archambault concentrated on his radio and television career while his partner, Marie-Hélène Fortin, the group’s violinist, became a municipal councillor in Rosemère, Quebec. Meanwhile, his brother, Benoît Archambault, worked on projects for children, recording two book/CDs (Les Pourquoi and Les Pourquoi 2) and, together with historian Éric Bédard, publishing Quand est-ce qu’on arrive? (Auzou), a book that playfully explores the history of Quebec. In December 2017, Mes Aïeux reunited and performed on Montreal’s televised New Year’s Eve show alongside Quebec singers Daniel Bélanger, Vincent Vallières and Laurence Nerbonne.

A group that asks questions

Mes Aïeux has often been depicted in the media as a group that is politically and socially engaged. Formed shortly after the referendum on Quebec sovereignty in 1995, the group prefers to describe itself as “concerned”. Its songs ask more questions than they answer. According to Stéphane Archambault, “What makes us raise all these questions is our desire to survive and endure, not just as a group, but also as Quebecers, as lovers, and as human beings.”

The environment is also a central concern for the members of Mes Aïeux. In 2007, they served as spokespersons for Coalition Eau Secours! (the Quebec coalition for responsible water management). In 2009, they became ambassadors for the Centre for Sustainable Development project in Montreal. In April 2012, they participated in the big Earth Day celebrations in Montreal against the backdrop of the 2012 Quebec Student Strike. The group are also spokespersons for Cystic Fibrosis Quebec and have published a song, “La différence”, from which they have donated the proceeds to this organization.

Lastly, when journalists ask the members of Mes Aïeux what is the recipe for their success, they answer that the magic goes beyond the words, the music, and the questions they raise—that the people who come to hear and see them live feel the communicative energy that these seven friends generate on stage. As they interact and have fun with their audience, a profound mutual respect develops between them.