Lucien Bouchard was born into a modest family from Lac-Saint-Jean, the son of Philippe Bouchard and Alice Simard. He studied at the Collège de Jonquière and at the faculty of law at Université Laval, where he met future prime minister Brian Mulroney. With degrees in social sciences and law, he was called to the Québec Bar in 1964.

Bouchard became a member of the Parti Québécois (PQ) in 1971, and he campaigned openly for the party’s local candidate in 1973. He had his own law practice before catching the public’s attention in 1974–75 in his role as chief prosecutor on the Commission of Inquiry on the Exercise of Union Freedom in the Construction Industry (the Cliche Commission), which was responsible for investigating violence and corruption in the industry following a case of vandalism at the James Bay hydroelectric site. In 1975, he co-chaired the Study Commission on the Public and Parapublic Sectors (the Martin-Bouchard Commission).

With the PQ having won the general election in November 1976, Bouchard became the government’s chief negotiator with the province’s 300,000 public servants. Starting in 1978, he was successively the president of the Saguenay Bar, then a member of the administrative committee and president of the specialization committee of the Quebec Bar.

In 1980, Bouchard was the leader of the “Yes” campaign during the Québec referendum on sovereignty-association. He is also credited with leading his friend Mulroney away from a centralizing federalist approach like that of Pierre Elliot Trudeau in favour of a decentralizing federalism.

In July 1985, Brian Mulroney appointed Lucien Bouchard the Canadian ambassador to France, a position he held until March 1988. As part of his duties, he presided over the International Preparation Committee of the second Summit of La Francophonie, which took place in Québec City in September 1987. Mulroney then found him a place in the federal Cabinet as Canada’s Secretary of State, and later as Minister of the Environment. Also serving as the Conservative government’s Québec lieutenant, he was a member of the committee on federal-provincial relations, the committee on operations and the committee on economic policy, as well as president of the committee on the environment. However, Bouchard became increasingly frustrated by the growing resistance of certain federalists to the Meech Lake Accord (see Meech Lake Accord: Document) and what he perceived to be Mulroney’s willingness to compromise on the accord to ensure it would pass.

On 21 May 1990, Lucien Bouchard resigned from the Cabinet and the Progressive Conservative Party and sat as an independent. The exact circumstances of his departure have been disputed. According to Bouchard, he resigned from Cabinet as a matter of principle, in frustration over Brian Mulroney’s concessions around the Meech Lake Accord. In contrast, Mulroney’s chief of staff, Norman Spector, has recalled that Mulroney instructed the Clerk of the Privy Council, Paul Tellier, to ask Bouchard for a letter of resignation after Bouchard sent a telegram to Jacques Parizeau that was read out at the Parti Québécois convention. Some sources suggest that Bouchard had planned to leave the Progressive Conservative party for weeks and that he had deliberately sent the telegram “to reconcile [himself] to the Parti Québécois” and the sovereigntist movement.

Within a few weeks of his resignation, Bouchard gathered a group of MPs from Québec (Conservatives as well as Liberals, including Jean Lapierre) who shared his ideas and formed the Bloc Québécois (BQ). Bouchard was elected president and leader of this new federal political party during the founding meeting held on 15 June 1991 in Sorel-Tracy.

Amid the atmosphere of betrayal and distrust that followed the rejection of the Meech Lake Accord, Bouchard became very popular in Québec. In the October 1993 general elections, the Bloc easily won the riding of Lac-Saint-Jean, which Bouchard had won as a Conservative in 1988. He led the Bloc to an extraordinary result of 49.3% of the popular vote in Québec, and the resulting 54 seats made the party the Official Opposition in Ottawa, a position it maintained until the June 1997 general elections ( see Leader of the Opposition).

Lucien Bouchard promised to make Québec’s immediate interests a priority in the new federal Parliament, setting aside sovereignty-related objectives until after the provincial elections and an eventual referendum could be held. In the meantime, he fought for job creation and economic recovery in Québec.

With the victory of the Parti Québécois in September 1994 and Québec sovereignty a viable outcome, Bouchard led the Bloc Québécois in opposing the federal government’s position on a referendum. The campaign for independence began to seriously break down, and Bouchard, still riding a wave of popularity, was called upon to take control of it from the more radical and less popular Jacques Parizeau (see Québec Referendum (1995)). On 30 October 1995, the sovereigntists were extremely narrowly defeated (the “Yes” camp won 49.42% of the vote, while “No” won 50.58%). Parizeau stepped down the following day, and Bouchard had to choose to either become the premier of Québec or remain the leader of the Bloc Québécois in Ottawa.

Lucien Bouchard ultimately opted for the premiership, and in January 1996 he gave up his seat in the House of Commons. Acclaimed the leader of the Parti Québécois on 27 January 1996, he was sworn in as premier two days later and entered the National Assembly after winning the riding of Jonquière in a by-election on 19 February 1996. He made the economy his priority and put independence on the back burner, a reversal resulting from political decisions and the desire to boost Québec’s economy.

Although some Quebeckers opposed the budget cuts to health care and social program expenditures, the fiscal policies of the PQ were somewhat successful in kick-starting the province’s struggling economy, eliminating its deficit. Despite tensions with the public sector and continued conflicts with Ottawa, the people of Québec voted to give the PQ a second term in November 1998. However, discouraged by the lack of enthusiasm for Québec sovereignty during his second term, Bouchard announced on 11 January 2001 that he was resigning as leader of the Parti Québécois and that he would step down as premier of Québec as soon as a successor was chosen. Bernard Landry, Minister of Finance, succeeded him on 8 March 2001. 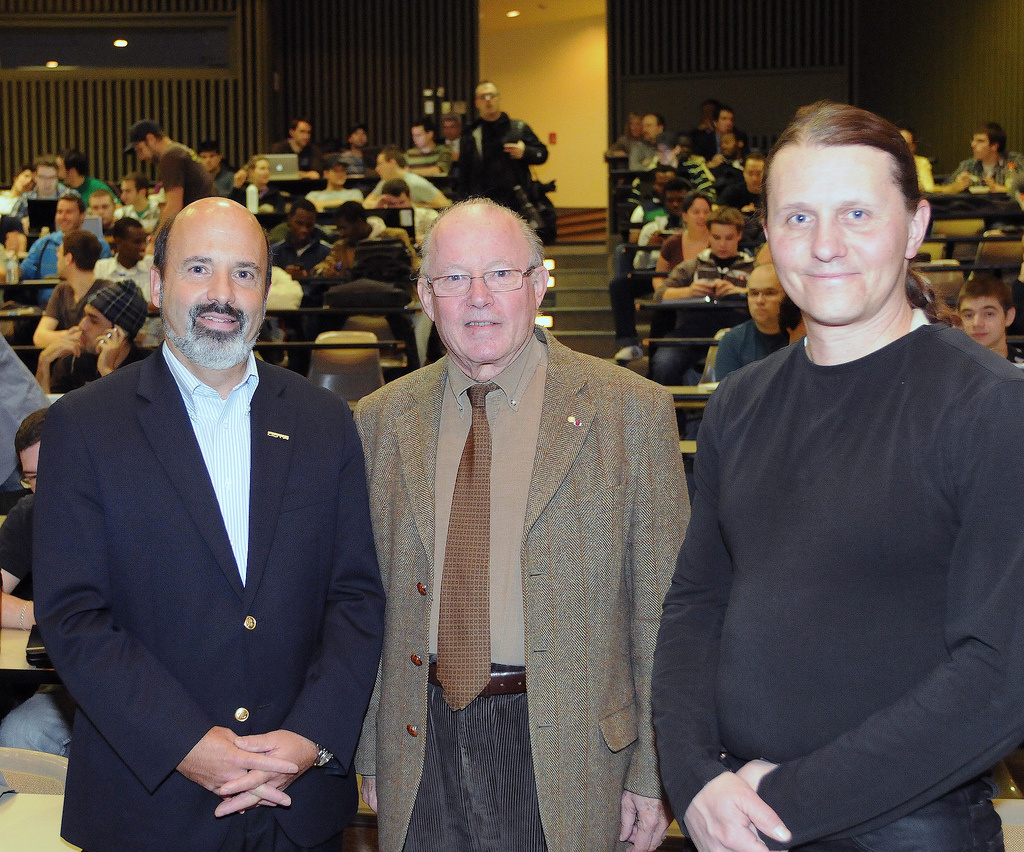 Lucien Bouchard returned to practising law as a partner at the firm Davies Ward Phillips & Vineberg. On 15 October 2005, he was one of twelve signatories of the manifesto Pour un Québec lucide, along with Joseph Facal, Pierre Fortin, Robert Lacroix, André Pratte and Denise Robert. Out of their concern for the economic, demographic and cultural future of the province, the “lucides” recommended relieving public debt and investing in education, but also raising tuition fees and electricity rates. Two weeks later, the counter-manifesto Pour un Québec solidaire appeared in response to these recommendations (seeQuébec solidaire).

From January 2011 to February 2013, he was president of the Québec Oil and Gas Association, and since April 2011, he has been the labour relations mediator at the Bécancour ABI aluminum plant. He has acted as a mediator between Resolute Forest Products, the government of Québec, and the Cree and Innu communities of Lac-Saint-Jean since January 2015. He sits on a number of boards of directors, including those of the Montréal Symphony Orchestra (of which he has been president since September 2004), Transcontinental, Saputo and BMTC Group.

Lucien Bouchard is the author of several specialized articles on law and labour relations. His autobiography, À visage découvert, was published in 1992 and translated into English in 1994. His most recent work, Lettres à un jeune politicien (2012), was the result of a series of interviews conducted with Pierre Cayouette. In it, Bouchard openly discusses the basics and the challenges of being in politics, including media relations, public speaking, compromise and how power is valued. In 2013, Carl Leblanc’s intimate documentary Nation ‒ Huis clos avec Lucien Bouchard looked back over the political career of Québec’s 27th premier.

Lucien Bouchard is the brother of historian and sociologist Gérard Bouchard, who co-chaired the Consultation Commission on Accommodation Practices Related to Cultural Differences with philosopher Charles Taylor.

Bouchard faced a serious health scare in November 1994, when doctors discovered that his left leg had been infected with necrotizing fasciitis, more commonly known as flesh-eating disease. The rare disease, which can be caused by several different bacteria, is often fatal and requires immediate treatment. Two days after Bouchard was diagnosed, doctors amputated his leg in order to halt the spread of the disease. He returned to Parliament on 22 February 1995.