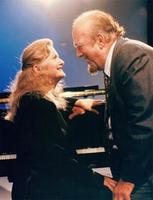 Louis Quilico, baritone, teacher (b at Montréal 14 Jan 1925; d at Toronto 15 July 2000). Quilico studied in Rome (1947-48), returning to Canada to work with Martial Singher and perform in operas with the Variétés lyriques. From 1952 to 1955 he studied on scholarship at Mannes College, New York. He won the CBC Radio competitions Nos futures étoiles and Singing Stars of Tomorrow in 1953 and the Metropolitan Opera Auditions of the Air in 1955. Quilico's New York debut was at the New York City Opera, 10 Oct 1955. He subsequently appeared with leading symphony orchestras and sang major roles with opera companies, including Covent Garden (1960-63), Paris Opera, Rome Opera, Canadian Opera Company, in Buenos Aires and at the Bolshoi Theatre. He became particularly renowned for his portrayal of the lead role in Rigoletto. After 1972 he performed regularly at the Metropolitan Opera, and his 25th year there was celebrated with a special evening in his honour. Quilico taught 1970-87 at the Faculty of Music, University of Toronto, and at McGill University 1987-90. Later he taught in Israel and Philadelphia, in the process developing a number of important young singers (Peter Barcza, John Dodington, Avo Kittask, Roelof Oostwoud, Janis Orenstein, Gino Quilico, Gary Relyea). He was awarded the 1965 Prix de musique Calixa-Lavallée and was named a Companion of the Order of Canada in 1974. In 1985 he received the Canadian Music Council medal. Quilico was a recipient of the Governor-General's Award in 1999. Four videos featuring Quilico have been released as well as 31 recordings.