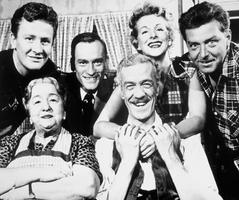 Les Plouffe (1948), a novel by Roger Lemelin in which the author's expansive comic gift offers an insider's view of Québec's working-class Lower Town district. Spanning WWII, the saga of the Plouffe family presents unforgettable characters within a social-realist tradition - the sensitive Ovide, wavering between religion and romance; the prankish Guillaume, a local sports hero; Cécile, a sour spinster; and many others. The imbroglios of Ovide's ambitious journalist friend Denis Boucher, the protagonist of Lemelin's first novel, lead to trouble for all in a community faced with censorship, conscription and militant Catholic trade unions. Populated by streetcar conductors, newspaper typographers, meddlesome priests and nosy neighbours, Lemelin's fiction gently satirizes and celebrates a blend of American and Catholic influences in local popular culture. Translated as The Plouffe Family (1950), the story was made into French and English CBC television series in the 1950s and a film by Gilles Carle, released in 1981.