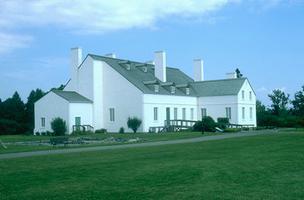 Production of iron began about 12 kilometres from Trois-Rivières River in 1733. A stream emptying into the St Maurice River provided the power and locally-produced charcoal was used in the furnaces to melt the ore (courtesy Library and Archives Canada/C-4356).
PreviousNext

Les Forges Saint-Maurice (St Maurice Forges), formed Canada's first heavy industry. The St Maurice iron ore deposits near TROIS-RIVIÈRES were developed by the second company endowed with a monopoly grant (25 Mar 1730) and state subsidies, after an earlier company had failed. Iron production began in 1738 and continued more or less uninterruptedly until the forges closed in the late 19th century. Bankruptcy of the company's director, F.E. Cugnet, led to state takeover in 1742, and after the Treaty of PARIS, 1763 ownership passed to the British Crown. The ironworks were then run by lessees, the most important being Matthew Bell in the years 1800-45.

The most technically advanced ironworks in America in their first 100 years, the forges had long been obsolete when shut down in 1883. The plant employed over 100 specialized craftsmen and 300-400 labourers, and produced forged iron and molded products such as pots, pans and stoves. Experiments with steelmaking and cannon-founding in 1747 were not fruitful. The work force, originally from the iron-producing regions of Burgundy, developed as a distinctive community, living in Canada's first COMPANY TOWN. In 1973 the St Maurice Forges became a national historic park, and archaeological research continues on the site.