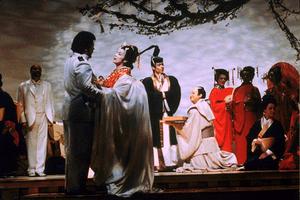 L'Opéra de Montréal opera company was founded by the Ministère des affaires culturelles du Québec on 30 January 1980 in order to revive the mandate of the defunct Opéra du Québec (1971-75). Its first artistic director was Jean-Paul Jeanotte. Initially the Opéra's administration was integrated with that of Montréal's PLACE DES ARTS, but in 1983 the board of directors gained autonomy and elected Jacques Langevin for a 3-year term as director general. At this point the Opéra's operations were relocated, and new administrative structures were created to address the aims of fundraising, accounting, public relations and communications. In 1984 the apprenticeship program, Atelier lyrique de l'Opéra de Montréal, was founded, with a mandate to nurture young operatic talent and ensure future artistic support for opera in Canada. With the election of Bernard Uzan to the position of general and artistic director in 1988, the company was able to improve its financial situation. In the same year, l'Opéra de Montréal made efforts to appeal to a wider audience by incorporating English and French supertitles into all productions. In 1989 Jacqueline Desmarais founded the Montreal Opera Guild, an organization modelled after New York City's Metropolitan Opera Guild providing financial support to the company through fundraising activities and benefit concerts such as the Gala (since 1995) and the Signature Event (since 2001).

The Opéra de Montréal has staged more than 800 performances of 86 operas, including 2 world premieres, 46 new productions, and numerous collaborations with companies such as Opera de Bellas Artes in Mexico, the Dallas Opera, the Florentine Opera Company, Florida Grand Opera, Houston Grand Opera, the San Diego Opera, Seattle Opera, and Vancouver Opera. Over the years the company has overcome its financial difficulties, achieved material and artistic stability, and developed season programs (5 or 6 productions per year including an annual production by the Atelier lyrique) that have won critical acclaim and have combined the talents of great Canadian operatic stars, internationally renowned artists and up-and-coming singers. It also administers the Choeur de l'Opéra de Montréal which, along with either the MONTREAL SYMPHONY ORCHESTRA or the ORCHESTRE MÉTROPOLITAIN, accompanies the Opéra's productions.

The Opéra performs at Montréal's Place des Arts. Its regular season usually comprises traditional operas, but lesser-known works have been featured, such as Gian Carlo Menotti's The Consul, Benjamin Britten's The Turn of the Screw Leos Janácek's Jenufa (the latter won 2 OPUS awards in 1998), as well as works from the operetta repertoire. In 1989 the Opéra's Canadian commission, Nelligan, by André GAGNON with a libretto by Michel TREMBLAY, won a Félix award for "Most Popular Production of the Season." In 2004 l'Opéra de Montréal's production of Bluebeard's Castle, with staging by Robert Lepage, won two OPUS awards.

Today the Opéra de Montréal is ranked among the 15 most important opera companies in North America, and productions can often be heard on Radio-Canada television and radio broadcasts.