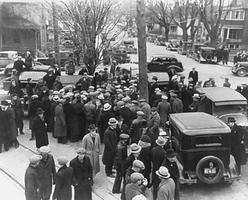 The General Motors strike of 1937, with workers gathered in Oshawa, Ontario (Archives of Labor and Urban Affairs, Wayne State University).

Industrial unionism is a type of labour organization. An industrial union is one which, for organizational purposes, includes all workers in a particular industry (eg, steel, automobile, textile) regardless of whether they are skilled or unskilled. The union's bargaining power is based upon the number of its members. In contrast, CRAFT UNIONS (plumbers, electricians) limit their membership to workers with a specific trade or skill. Their power is based upon the scarcity of highly skilled labour. Craft unions, established first, dominated the labour scene until the 1930s but are now largely confined to the construction industry.

The first significant attempt to organize on an industrial basis was undertaken in the 1880s by the KNIGHTS OF LABOR, which advocated unity of the producing classes and opposed employer blacklists and discrimination. It was briefly successful in organizing not only unskilled male workers but also women and minorities but it was opposed by the American Federation of Labour (AFL). The TRADES AND LABOUR CONGRESS OF CANADA (TLC), which the Knights helped to found, accepted both craft and industrial unions until its 1902 convention in Berlin (now Kitchener), Ontario, when the TLC expelled the Knights in Canada on the grounds of "dual unionism." It decided to adhere to AFL decisions concerning jurisdiction among unions and apply them to Canada. While maintaining Canadian autonomy over its political and legislative policies, the TLC elected craft unionist John FLETT as its president and accepted AFL financial assistance for organizing purposes.

After the demise of the Knights in the 1890s, the idea of industrial unionism persisted as craft unions came to be regarded as anachronistic in an increasingly industrialized society of larger corporations and growing mass production processes which used more unskilled and semi-skilled workers. Organizations such as the Catholic union movement in Québec in the 1920s (seeCONFEDERATION OF NATIONAL TRADE UNIONS) and the All-Canadian Congress of Labour (established 1927) sought to combine the principles of nationalism and industrial unionism. In the 1930s, the Workers Unity League, a communist-sponsored organization, became interested in organizing all workers in the emerging mass-production industries.

The difficult task of organizing the bulk of the industrial labour force was not accomplished in Canada until WWII by the Congress of Industrial Organizations (CIO), in co-operation with its Canadian counterpar, the CANADIAN CONGRESS OF LABOUR (CCL). This new industrial union movement originated in 1933 in the US in response to workers' needs during the GREAT DEPRESSION and in opposition to entrenched craft unions, but it also attracted thousands of Canadian workers, especially after the 1937 OSHAWA STRIKE against GENERAL MOTORS, into what would become established industrial unions such as the UNITED AUTOMOBILE WORKERS (seeOSHAWA STRIKE), the United Electrical Workers, the United Steelworkers and others. It was successful because the political and economic climate in the post-war period, which combined a desire for future security with existing economic prosperity, was ripe for a pragmatic form of "business unionism," which combined organization on an industrial basis with a philosophy emphasizing collective bargaining, union security and strike action to improve wages and working conditions.

In Canada, the new industrial unions also favoured social reform and political action and formed a lasting alliance with the CCF/NDP. In the 1960s and 1970s, new white-collar unions like the CANADIAN UNION OF PUBLIC EMPLOYEES (CUPE) emerged that follow the industrial-union model, but their composition, concerns and approaches to COLLECTIVE BARGAINING differed somewhat from those of their blue-collar predecessors.