The common interests of workers belonging to different unions have found expression over time in a succession of union centrals. The main functions of these central labour bodies have been to co-ordinate the activities of member unions. They represent the interests of labour to local, provincial and federal governments as well as in coalitions with other reform movements in Canada and in relations with organized labour on the world scene. As a rule union centrals in Canada have had limited authority over their affiliates, except in jurisdictional matters, but for many Canadians these organizations and their leaders represent the voice of Canadian labour.

The most important union central today is the Canadian Labour Congress (CLC), whose affiliated unions represent more than 2.5 million workers, about 63% of the union members in Canada (1996). Other union centrals which exist today include the Québec-based Confédération des syndicats nationaux ( Confederation of National Trade Unions 250 000 members), which adopted its present name in 1960 but traces its history back to the Confédération des travailleurs catholiques du Canada (Canadian and Catholic Confederation of Labour, 1921). The Canadian Federation of Labour (140 000 members) was organized by building trade unions which broke away from the CLC in 1982. The Centrale de l'enseignement du Québec (Quebec Teachers' Union, 108 000 members) was formed in Québec in 1974 by public sector unions, especially teachers. Smaller centrals include the Confederation of Canadian Unions (1969) and the Centrale des syndicats démocratiques (1972). In addition, about 20% of the 4 million union members in Canada belong to independent local organizations or unaffiliated national unions.

In contrast to the large central labour bodies of today, the earliest union centrals were more limited in scope and emerged around the common interests of organized labour in individual communities. For instance the shortlived Montreal Trades Union (1834) brought together delegates from the various local unions in Montréal to campaign for a reduction of the working day from 12 to 10 hours. Such local organizations were the forerunners of the many local labour councils which today coordinate union activities in communities across Canada. For instance, in 1996 the Toronto Days of Action were sponsored jointly by the Metro Toronto and York Region Labour Council and a local social justice coalition. At a broader geographic level of cooperation, there have also emerged various provincial and territorial councils and federations of labour. The first of these included the British Columbia Federation of Labour (1910) and the New Brunswick Federation of Labour (1913), which advocated improved labour laws and other reforms. The provincial councils and federations have been especially important in Canada because the labour relations system is governed primarily by provincial governments. On the contemporary scene the federations have been active in defending the rights of workers and protesting reductions in public services at the provincial level.

The emergence of the CLC as the dominant union central in Canada has been relatively recent. It was established in 1956 by a merger of two rival union centrals, the Trades and Labor Congress of Canada (TLC) and the Canadian Congress of Labour (CCL). The TLC was first organized in 1883, following the failure of the ambitiously named Canadian Labour Union (1873-77), whose membership was limited to Central Canada. Initially the TLC was also limited to Ontario and Québec, but by the early 20th century the TLC represented members in all parts of the country. A controversial decision taken at the 1902 TLC convention in Berlin (later Kitchener), Ontario, restricted membership to unions which belonged to the international unions of the American Federation of Labor (AFL) or had no jurisdictional conflicts with the AFL unions. The Berlin decision defined the TLC as a spokesman for skilled workers, but limited its appeal to less privileged workers, including immigrants, women and minorities, and undermined the movement for independent political action by organized labour. The National Trades and Labour Congress (1902-8), the Canadian Federation of Labour (1908-27) and the All-Canadian Congress of Labour (1927-40) were union centrals composed largely of Canadian-based organizations expelled from or hostile to the TLC.

Additional labour centrals were established by radical unionists in the form of One Big Union (1919-56) and, during the Great Depression, the Workers Unity League (1929-36), both of which insisted on the importance of a broadly based Industrial Unionism in preference to the Craft Unionism of the AFL. During the organizing boom associated with the Committee for Industrial Organization, later the Congress Of Industrial Organizations (CIO), in the United States after 1935, new industrial unions emerged in the steel, auto, electrical and other mass-production industries. When these new unions were expelled from the TLC over jurisdictional disputes in 1939, they launched the Canadian Congress of Labour (1940-1956), a new labour central which also won the support of the ACCL.

These divisions in the house of labour were repaired to some extent in the 1950s. The AFL and CIO joined forces in the United States in 1955 (see AFL-CIO), and in the following year the CLC incorporated both the TLC and CCL unions as well as remnants of the OBU. Soon afterwards CLC leaders joined with supporters of the Co-operative Commonwealth Federation to form a new left-wing political party, the New Democratic Party (1961), an alliance which has had mixed success but remains in place to the present. Meanwhile, many of the CLC affiliates, such as the autoworkers, have left the international unions and this, along with the increasing prominence of public sector unionism, has strengthened the distinctive Canadian identity of the CLC as a labour institution (see Public-Service Unions).

The former CLC president, Bob White, was the best-known labour leader in Canada today and his voice is still often heard in debates over economic policy and social justice. The CLC agenda at its biennial meetings, which attract about 3000 delegates, typically includes resolutions stressing the objectives of jobs, security, equality and democracy for Canadian workers and the importance of global solidarity in the age of transnational economies. 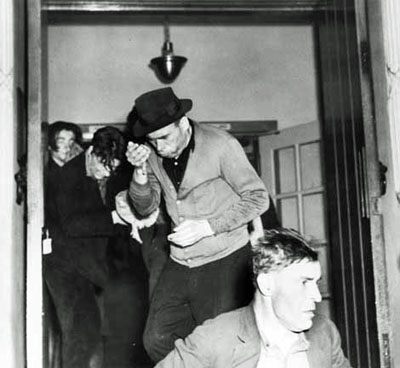