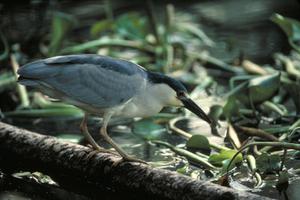 The black-crowned night heron is usually found at river mouths and is especially active at dusk (Corel Professional Photos). 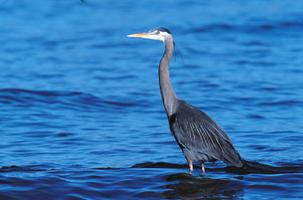 The great blue heron, the largest and most common heron in Canada, stands over 1 m tall (photo by Brian M. Wolitski).

The great egret was much reduced in numbers by hunters who sold the plumes for millinery, but it is now protected (Corel Professional Photos).

Herons, such as this great blue, are skilful fishers, standing in depths no greater than the length of their own legs or bill to catch prey (courtesy First Light Associated Press).
PreviousNext

Most herons are long-legged, long-necked wading birds which look for food (tiny fish, crustaceans, insects, amphibians and reptiles) in shallow fresh or salt water. They have long, rounded, rather broad wings and relatively short tails. They are distinguished from cranes by their position in flight, necks bent and heads supported between their shoulders. All have straight, rather long bills that distinguish them from ibises, which are similar in appearance but have long, curved bills.

The sexes vary little in appearance. Plumage is generally dull, but certain species have crests and ornamental plumage during breeding season. Under flank plumage, the bird has layers of powder down, used to rid feathers of oil, grease and mud. The powder is applied by the claw of the middle toe, which has comblike teeth on its inner surface. Once the feathers are preened, the bird waterproofs them with oil from its uropygial gland.

Most herons and egrets nest in colonies, sometimes in mixed-species groups. Nests of small branches are built, sometimes high in trees, usually in wooded areas out of reach of predators. Egrets nest closer to the ground, usually in freshwater marshes among clumps of reeds. Most species lay 3-5 (usually 4) pale blue or bluish green eggs.

The great blue heron (Ardea herodias), the largest and most common heron in Canada, stands over 1 m tall. It frequents river banks and tidal bays, where it wades deep into the water to fish. It is found from Nova Scotia to Alberta, and on the British Columbia coast and islands.

The black-crowned night heron (Nycticorax nycticorax) is a squat bird of Nova Scotia, the Great Lakes-St Lawrence River area, and southern Manitoba and Saskatchewan. It is usually found at river mouths and is especially active at dusk. Its vernacular name, night squawk, results from its cry in flight.

The guttural cries of American bittern (Botaurus lentiginosus) may be heard in marshlands throughout southern Canada and up to Great Slave Lake, NWT. The bird blends perfectly with the vegetation of the marshlands.