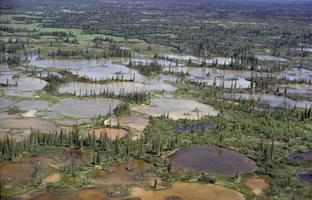 The whooping crane (Grus americana), standing almost 1.5 m high, is the tallest North American bird. Adults may weigh 7.5 kg and have a 2.2 m wingspan. They are impressive in their pure white plumage with black wing tips, long black legs, black moustache like markings and red crown. In their first summer and fall, juveniles are predominantly cinnamon and white. After their first birthday, they are almost indistinguishable from adults.

Whooping cranes, indigenous to North America, are officially classified as endangered animals. In 1941 only 15 wild migratory birds remained, and conservation measures and joint management by the Canadian and US Wildlife Services and other organizations were instituted. In 1994, 133 wild birds, including 8 juveniles, migrated from their only breeding range, in Wood Buffalo National Park, to their winter range in the Aransas National Wildlife Refuge on the Texas coast. In 1990-95, 28 to 45 pairs nested in Wood Buffalo and were watched by Canadian Wildlife Service biologists. In 1975-88, a small number of surplus eggs were removed and placed in nests of greater sandhill cranes (G. canadensis tabida) in Idaho. The foster parents hatched and reared the whooper chicks. It was hoped these whoopers would mate with their own kind to form a new, self-perpetuating population. Unfortunately, they never paired and raised any young of their own.

A new experiment is now under way to introduce whooping cranes raised in captivity into a nonmigratory situation in central Florida. Juvenile birds have been released since 1992 and 15 cranes are now in their new home. Some of the released cranes have paired and if all goes well, a few may begin to breed. Two viable, geographically separate populations would greatly reduce the danger of extinction.

Whooping cranes nest and raise their young in inaccessible bogs and bulrush marshes. In some years, dry weather destroys nesting and feeding habitat, and wolves may take some young, leaving only a few juveniles to begin the 3900 km migration with their parents.

En route, hazards such as powerlines may endanger them, particularly if the birds are flying low during poor weather conditions. They spend the winter feeding and resting. During late March and early April the northward migration begins. They arrive the last week in April.

Two eggs (rarely one or 3) are laid in a large nest of bulrushes. Eggs are incubated by both parents and reddish brown chicks hatch after 29-30 days. Usually, only one chick survives.