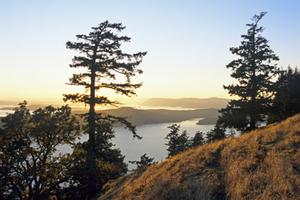 Gulf Islands are a cluster of 225 islands and islets in the Str of GEORGIA E of VANCOUVER I. SALTSPRING is the largest and most populated, and is linked with GALIANO, N and S Pender, MAYNE and Saturna islands by car ferry. VALDES, Thetis, Kuper and Gabriola islands have similar physical and climatic features. Glacial movement created distinctive oceanside and hill-and-valley landscapes on the larger islands, eroding folded sedimentary rock into ridges of sandstone and conglomerate and narrow valleys of softer rock. Exposed bedrock on the islands' numerous points and coves forms interesting stacks, fretworks and galleries. A smooth-barked leafy evergreen, the arbutus tree, occupies exposed rocky sites overlooking the water, and the Garry oak grows on parkland on the islands' sunny sides.

Their bucolic charm, calm waters, rich bird and marine life and mild climate, in the driest zone on Canada's Pacific coast, have attracted homesteaders and cottagers since about 1859. Stands of tall timber growing in deep soil were logged early in this century. With improved ferry service since the 1960s, tourism has challenged farming as the islands' most productive industry.

The resident population has burgeoned, mostly from an influx of retired people, but also artists such as Robert BATEMAN and craftspeople. A number of West Coast artists, craftspeople and writers have also settled here. Preserving the Gulf Islands' character in the face of development pressure is a local political issue.