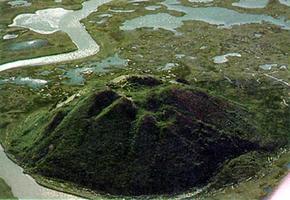 Pingo near Tuktoyaktuk, NWT. These icy mounds form when water under pressure in the ground freezes (photo by Aerocamera Services Inc.). 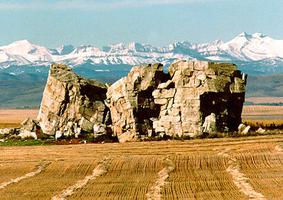 The Big Rock, a glacial erratic, is located 7 km west of Okotoks (courtesy Town of Okotoks/photo by Gail McArthur) 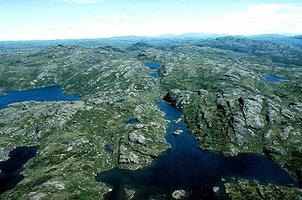 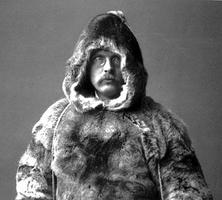 Joseph Tyrrell was a new breed of explorer, a wilderness traveller who was also a scientist (courtesy Thomas Fisher Rare Book Library).
PreviousNext

Geomorphology is primarily concerned with the scientific study of landscapes and landforms on Earth's surface, and the processes acting on them, although geomorphic principles are also applied to the study of planetary bodies with solid crusts, such as the moon and Mars. Geomorphologists seek to explain variations in surface form and evolution, and the impact of geomorphological processes on human populations, including hazardous events such as LANDSLIDES and river flooding, which may intensify in the future with CLIMATE CHANGE. Modern geomorphologists usually align themselves with a specialized branch of the subject, such as GLACIERS, RIVERS or COASTS. In Canada, which was covered by several large ice sheets and still has PERMAFROST underlying half its land mass, many geomorphologists are concerned with the Quaternary (last 2.6 million years) or with prevailing cold conditions.

Geomorphology is related to GEOLOGY because of the importance of long timescales, tectonic deformation of Earth's crust (seePLATE TECTONICS), and rock and sediment properties; and to physical geography through its association with CLIMATE, BIOGEOGRAPHY, SOIL SCIENCE, and HYDROLOGY. Despite fundamental changes in the subject in the last few decades, 2 main streams can still be identified: the historical approach concerned with long-term landscape evolution, often with changing climatic, biological, sea-level, tectonic, human and other conditions; and process geomorphology concerned with understanding essentially recent processes and their effect on different geological materials.

Geomorphological forces are driven by energy from the SUN, gravity, and Earth's internal heat. Landscapes are sculptured by processes that weather, erode, transport and deposit earth materials (see alsoEROSION; WEATHERING). Changes to the landscape may occur during infrequent, high energy events, such as river floods (high intensity, low frequency), or during more normal periods of low energy, such as daily river flow (high frequency, low intensity). Landscapes are constantly changing. The types of landscape, and the smaller landforms of which they are composed, reflect the nature, power and frequency of the processes acting on the land and the resistance of the materials on which these processes are operating. Ripples on sand dunes are an example of small features that can form very quickly under fairly strong wind conditions (see alsoAEOLIAN LANDFORM), whereas continental SHIELDS and mountain chains are very large landforms that evolve very slowly, over millions of years.

In addition to specialized equipment to measure and record changing conditions in the field (including river velocity and discharge, sediment transport, waves and winds, soil and rock temperature and moisture, and rates of erosion) researchers use a variety of dating methods and technologies (including laser radar, REMOTE SENSING, ground-penetrating radar and global positioning systems), and advanced computational methods (including GEOGRAPHIC INFORMATION SYSTEMS and digital elevation models). Data collected from the field and laboratory are often used in mathematical models to help researchers study how geomorphic systems operate and evolve over time.

Geomorphological descriptions occur in most reports of exploration since the 1850s, and surface deposits have been described by the GEOLOGICAL SURVEY OF CANADA (GSC) since its creation in 1842. Early controversy focused on whether erratic boulders were transported by floating ice or by continental glaciers. By about 1875 the glacial theory was widely accepted, except by John W. DAWSON of McGill, author of The Canadian Ice Age (1893). His son, George M. DAWSON, explored much of western Canada and published the first comprehensive work on Canada's physiography (1884).

Most areal reports on bedrock geology before 1950 contained small sections on geomorphology and glacial geology. Several geologists with the GSC made more definitive contributions: Robert Chalmers in southern Québec and New Brunswick; Joseph B. TYRRELL in northern Manitoba; William A. Johnston in Ontario, the eastern prairies and British Columbia; James W. Goldthwait in the St Lawrence Valley and Nova Scotia; and Edward M. Kindle studying recent sedimentation processes. After World War II, the GSC established a group of a dozen glacial geology specialists, which evolved into the Terrain Sciences Division (now Northern Canada Division), at that time the largest single group of geomorphologists in Canada. Early contributors outside the GSC were David Honeyman in Nova Scotia (active 1862-88); Joseph W. Spencer, Frank B. Taylor and George M. Stanley, students of the glacial Great Lakes (1894-1945); and Arthur P. Coleman, who worked across Canada and wrote on Precambrian and Pleistocene GLACIATIONS, including his book The Last Million Years (1941). Glaciological observations were begun in Alberta and British Columbia by George and William S. Vaux in 1899 and continued by Arthur O. WHEELER until 1931. Erosion surfaces of the Precambrian SHIELD were treated by Alfred W.G. Wilson in 1903 and by Harold C. Cooke of the GSC in 1929-33.

The expansion of geography departments offering programs in PHYSICAL GEOGRAPHY brought an influx of British and other geomorphologists, and the development of a broadly based discipline that replaced the more limited geological geomorphology of earlier decades. Many geographical geomorphologists established international reputations during the latter half of the last century, including Derek Ford (KARST LANDFORMS), Michael Church (river processes), J. Ross Mackay (cold regions), and Hugh French (PERIGLACIAL LANDFORMS). Similar growth occurred in geology departments, which offered graduate instruction in geomorphology and advanced degrees in glacial or quaternary geology.

The Geographical Branch, a federal agency parallel to the GSC, was created in 1947 and emphasized arctic geomorphology. It was dissolved in 1967; its journal, Geographical Bulletin, ceased publication and most staff members joined other units. An explosive increase in the number of geomorphological publications took place between 1950 and 1970. Regional monographs appeared on the Canadian CORDILLERA by Hugh S. Bostock (1948), on southern Ontario by Lyman J. Chapman and Donald F. PUTNAM (1951), on British Columbia by Stuart S. Holland (1964), on the Arctic by J. Brian Bird (1967) and on Canada as a whole by Bird (1972). Alan S. Trenhaile wrote the first systematic geomorphology of Canada in 1990, and the various editions of his later, more general geomorphology text have retained a strong Canadian emphasis.

Geomorphological principles and techniques have important practical applications relevant to natural hazards, RESOURCE MANAGEMENT and CONSERVATION, development and planning, environmental issues, and engineering problems. Indeed, many of our greatest environmental problems, particularly those resulting from changing climate and land use, have important geomorphological components, including melting permafrost, rising sea level, river flooding, soil erosion and the possible reactivation of sand seas. The recent growth in applied geomorphology has been generated also by increasing recognition of the complexity of environmental issues by decision makers, the introduction of legislation requiring ENVIRONMENTAL IMPACT ASSESSMENTS, the recognized danger posed by geomorphological hazards, and engineers' demands for information on ground conditions. Because of more precise methods of measurement, mapping and analysis, geomorphologists are much better equipped to solve practical problems and to mitigate the effects of environmental disasters and crises than in the past. There is likely to be increasing emphasis in the future on research directed to environmental problems. There are already growing numbers of consultancy firms across Canada employing geomorphologists on river restoration, coastal erosion and other environmental projects; this has been promoted, particularly since the beginning of the 21st century in most of Canada, by professional licensing of geomorphologists and other geoscience practitioners.

Canadian geomorphologists publish in a wide variety of international journals including Geomorphology and Earth Surface Processes and Landforms, as well as in scientific journals that specialize in particular branches of the subject. In Canada, the Geological Association of Canada and the National Research Council's Canadian Journal of Earth Sciences provides an important forum; and l'Association Québecoise pour l'étude du Quaternaire and the Canadian Quaternary Association sponsored the journal Géographie physique et Quaternaire (1977-2009).