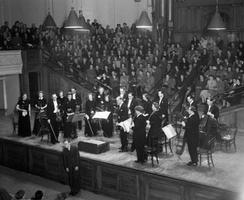 Frederick Grinke. Violinist, teacher, b Winnipeg 8 Aug 1911, d Ipswich, Suffolk, Eng, 16 Mar 1987; FRAM 1945. After studies with John Waterhouse and others in Winnipeg, Grinke won a Dominion of Canada scholarship to the RAM in 1927. He studied there with Rowsby Woof and later in Switzerland with Adolf Busch and in Belgium and London with Carl Flesch. He was a member ca 1930-6 of the Kutcher String Quartet and served 1937-47 as concertmaster of the Boyd Neel Orchestra. In a long and distinguished career as a soloist Grinke performed in Europe, the USA, Australia, and New Zealand, at the London Promenade Concerts, and at the festivals in Edinburgh, Salzburg, and elsewhere. In 1935 in London, with the pianist Dorothy Manley, he premiered Gratton'sQuatrième Danse canadienne. In Canada Grinke gave a recital for the Women's Musical Club of Winnipeg in 1960, was soloist with the Winnipeg Symphony Orchestra in the Elgar Concerto in 1967, performed on CBC radio's 'Distinguished Artists,' and was a string coach for the NYO in 1965 and 1969. Vaughan Williams dedicated his Sonata in A Minor (1952) to Grinke, who was known especially for his performances of 20th-century English music. Grinke recorded that work for English Decca, along with others by Benjamin, Berkeley, Ireland, Purcell, Rubbra, and Vaughan Williams. His other recordings include music of Bach, Bartók, Beethoven, Dvořák, Handel, Mozart, Rachmaninoff, and Smetana. A detailed discography is published in Discopaedia. Grinke began teaching at the RAM in 1939, and counted many of Great Britain's leading performers among his pupils. He also taught 1963-6 at the Yehudi Menuhin School in Stoke D'Abernon, Surrey, and he frequently served on juries for international competitions. Although he retired from the professorial staff of the RAM in 1978, he continued to do occasional teaching until his death. By Vaughan Williams' wish, Grinke and another native Canadian, David Martin, were invited to perform the Bach Double Concerto at the composer's funeral in 1958. Grinke was named a Commander of the Order of the British Empire in 1979. In his obituary, the Musical Times (vol 128, May 1987) wrote '... he will be best remembered as an energetic, wise and generous teacher of generations of students at the RAM..'.
×