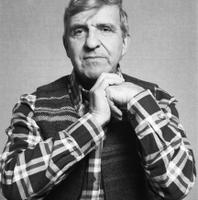 A seminarist with the Frères maristes, Fernand Leduc entered the École des beaux-arts de Montréal in 1938. After graduation in 1943, he left the church and shortly after became a member of the Contemporary Arts Society. During the same period, he participated in the formative years of the Automatistes group fostering the movement by providing influential art criticism for the student newspaper Le Quartier Latin. He experimented at that time with various forms of "automatic writing," (ie, spontaneous and gestural nonfigurative painting).

Fernand Leduc was responsible in 1945 for making contact with the French writer André Breton in New York in order to make European surrealists more aware of the contribution of the Montréal automatistes. Generally seen as the theoretician of the group, he contributed a text to the publication of the Refus global in 1948 titled "Qu'on le veuille ou non... ceci sera" ("Like it or not ... This will be"). Leduc left Montréal for Paris in 1947, where he participated that year in an important exhibition, called Automatisme, at the Galerie du Luxembourg that examined the group.

In Paris, Leduc developed a friendship with the painter Jean Bazaine, whose art was moving into the category of abstracted landscape. This contact would have an influence on Leduc's works of the early 1950s, mostly the works on paper executed on Île de Ré. He returned from Paris in 1953 and by that time had begun to realize that the automatiste painting techniques had reached an impasse. During this period he became more concerned with the concept of a "constructed order" and the role of geometry.

Fernand Leduc moved to a type of hard-edge abstraction in 1955, his works gradually becoming more involved with interactions and contrast of colours. In Montréal, Leduc came to the defense of these more Plasticien-related theories on the occasion of the exhibition Espace 55. Reactions to the show provoked a debate between himself and Paul-Émile Borduas, who disapproved of the new directions taken by Montréal painting.

By 1956 Leduc had become the president-founder of the Non-Figurative Artists' Association of Montréal. He returned to France in 1959 and stayed there until 1970, when he came back for two years to teach at Université Laval and the Université du Québec in Montréal. After this short stay in Québec, he developed the series called microchromies, a still ongoing exploration of the qualities of light as vibration and as a subtle creator of colour.

The Musée des beaux-arts de Chartres and the Musée du Nouveau Monde de La Rochelle organized a retrospective of his oeuvre in 1985 that circulated later in Canada. He was awarded the Louis-Philippe Hébert Prize in 1979, the Paul-Émile Borduas Prize in 1988 and the Fovernor General's Award in visual and Media Arts in 2007. After living for many years in Paris and Italy, Leduc returned to Montréal in 2006.