After the War of 1812, Black loyalists, like Richard Pierpoint, arrived in the area and established Pierpoint Settlement. In 1831, Scottish lawyer Adam Fergusson came to Canada to explore settlement opportunities. He was impressed with the Fergus area and returned the next year with James Webster. Together they purchased 2,956 ha of land and laid out the townsite. The community was originally called Little Falls. When the post office opened in 1836, the name was changed to Fergus, after Fergusson.

Fergus has always served as a small industrial town. In 1835, a grist mill was built. The area experienced an economic boost in 1870 when the Wellington, Grey and Bruce Railway was built, and in 1880 when the Credit Valley Railway passed through the town. The hospital was built in 1902. Its founder, Dr. Abraham Groves, was the first man in North America to perform an appendectomy. Fergus was also the home of Patrick Bell, the inventor of the reaping machine. Today, manufacturing companies continue to be major employers in Fergus.

Today, Fergus still has over 200 buildings built in the 19th century. Fergus is host to the annual Fergus Highland Games, the largest Highland Games in North America. The Wellington County Museum is located between Fergus and Elora in a building that was once the county’s poorhouse. The building was designated as a national historic site in 1995. Templin Gardens, a public garden and rockery on the Grand River, is also a local attraction. 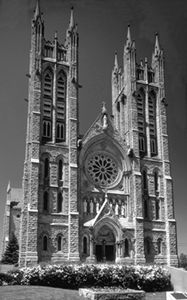