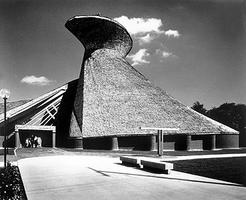 Étienne-Joseph Gaboury, architect (b at Swan Lake, Man 24 Apr 1930). Gaboury's strong links to the prairie landscape and the Franco-Manitoban community of his youth are reflected in his architecture. He was educated at St Boniface College, University of Manitoba (B Arch, 1958) and the École des beaux-arts, Paris (where the late work of Le Corbusier influenced him strongly). After apprenticing in Manitoba, Gaboury formed a partnership in Winnipeg with Denis Lussier and Frank Sigurdson, but since 1976 has been the singular principal. An important early building was the 1968 Precious Blood Church in St Boniface, a striking church notable for its double spiral of wooden beams reaching to an oculus. A major opportunity presented itself in rebuilding within the shell of the burnt St Boniface Cathedral by J. Marchand (b 1909), thus creating a Winnipeg parallel to the rehabilitation of Coventry Cathedral, bombed in England in WWII.

Gaboury has worked in a variety of other idioms, including the high-tech Royal Canadian Mint in Winnipeg (1978), the hybrid Canadian-Mexican regionalism of the Canadian Embassy in Mexico City (1982), and the urban infill of the Provincial Remand Centre (1992). The Nelson House School (1986), by virtue of its shape, is seen as an emblem of community. By nesting itself into a hill at the forest's edge, it truly responds to its northern location. Gaboury's designs are linked by a concern with landscape, texture and cultural identity, and by the manipulation and celebration of sunlight.