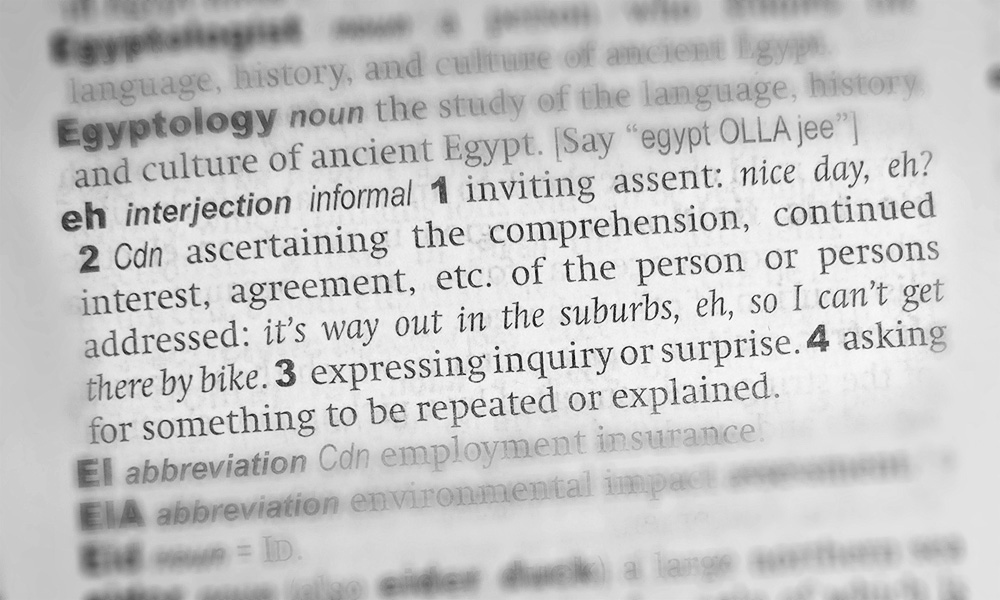 According to the Oxford English Dictionary, the Modern English eh derives from Middle English interjections such as ey, ei and a. The modern spelling, eh, could have developed independently from Middle English variants; however, it was most likely adopted from the French eh. The use of eh as a demand for repetition compares with Chaucer’s use of I in Troilus and Criseyde (c. 1380s):

By the 18th century, eh was in use as an interjectional interrogative particle (a verbal question mark), and circa 1772–73 Irish novelist and playwright Oliver Goldsmith included the line, “Wasn’t it lucky, eh?” in his play She Stoops to Conquer. Eh as a request for repetition such as “Eh? What’s that, Sackville?” appears by the 19th century.

Although eh has its roots in Middle English and did not originate in Canada, the interjection acts as marker of anglophone Canadian identity and distinguishes Canadian English from other dialects. Eh is internationally recognized as a uniquely Canadian form of speech, often to the point of exaggeration and stereotype.

While linguists have mostly ignored eh as an outdated symbol of Canadian identity, there has been some debate as to whether the interjection constitutes a Canadianism. The notion that eh was a uniquely Canadian interjection came to public attention in the early 1970s, when Toronto lawyer Mark M. Orkin and professor of English Walter S. Avis debated its significance in Canada. The debate began when Orkin listed eh as part of Canadian English in the book Speaking Canadian English (1970). In his paper “So eh? is Canadian, eh?,” Walter S. Avis responded to Orkin and argued that “eh is no Canadianism — for it did not originate in Canada and is not peculiar to the English spoken in Canada.” Avis argued that because dictionaries do not recognize eh as a Canadian expression, it must be part of a universal language. Many dictionaries today, however, do classify eh as a Canadianism, including the Cambridge Dictionary, Merriam-Webster Dictionary, Encarta Dictionary, American History Dictionary and the Canadian Oxford Dictionary. Sandra Schecter entered the debate in 1979 with her essay “Eh? Revisited: Is it or Is It Not Canadian?” arguing that eh is a central component of Canadian identity.

A 2004 survey on Canadian contemporary uses of eh shed light on the debate. Linguist Elaine Gold questioned students in her Introduction to Linguistics course at the University of Toronto about their use of and attitude toward 10 different constructions of eh. Of the 109 respondents, 35 were males and 74 were females — all were 30 years of age or younger.

While some linguists agree that eh is a marker of Canadian speech, they disagree over what type of eh is uniquely Canadian. Dictionaries cite one of two main uses: eh as a question tag; or, the narrative eh.

Gold’s survey helps to clarify the matter by asking Canadian speakers if and how they use eh. Both individually and collectively, the dictionaries (listed above) do not come close to citing the many nuances of eh. Gold’s survey provides the most extensive list of the different variations. Although the survey provides useful information on Canadians’ use of and attitude toward eh, there are some limitations to this method of data collection. As Gold explains, “one problem with this method of self-reporting is that many speakers are unaware of their own use of eh.” Speakers are especially unaware of their use of the narrative eh because it often serves as a comma, question mark or an unconscious pause (similar to um, like or ah). The following table lists the 10 categories (and 12 examples) used in Gold’s survey:

For each of the 10 categories, the survey asks respondents if they have heard that particular type of use, whether they use it themselves and whether their attitude to the usage is positive, neutral or negative. Most of the respondents have heard people use the 10 different types of eh, with recognition rates ranging from 50 to 100 per cent. The following expressions rank as the top three for both usage and recognition: statements of opinion, exclamations, and the expression “I know, eh?” What is really interesting is that while dictionaries and linguists classify the narrative eh as Canadian, the Canadian-born respondents claim to use the narrative eh the least of the 10 categories. The narrative eh also receives the highest negative response.

Popular culture, for instance, equates the narrative eh with Canadians. Literature and film often use eh as a deliberate stereotype: the 1995 film Canadian Bacon satirizes American stereotypes of Canada by portraying a friendly Mountie who uses the narrative eh. In Elaine Gold’s survey, some respondents describe the speaker of the narrative eh (number 10 in the survey) as “an American trying to imitate a Canadian.” As Gold says, “it is clear that the narrative eh is considered to be both stereotypically Canadian and highly stigmatized, a fact reflected in the highly negative attitudes assigned to this use.”

Whether Canadians use eh or not, people identify it as a marker of Canadian English. Within Canada, eh is popular from coast to coast. Linguists, dictionaries, novels and popular culture all recognize eh as a distinctive part of Canadian English. As Sandra Schecter says,

can you think of any people aside from Canadians who take an active pride in “eh?” and are determined to claim it as their own? Where else do so many academics and laymen spend so much time arguing about it? Is this not in itself evidence that “eh?” is a component of that elusive phenomenon called “Canadian identity”?

A version of the entry originally appeared on CHASS (Computing in the Humanities and Social Sciences).