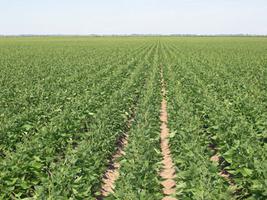 Common bean refers to both bean plants grown solely for immature fleshy pods (garden or green bean) and those grown for dry seeds (dry bean). The largest production and consumption of the crop species is the dry bean type, which represents one of the main pulse crops in Canada. Dry bean has evolved from a wild growing vine in the highlands of Central America and the Andes in South America into a major food legume crop. The cultivated type was introduced to Canada by European settlers. The need for diversification of crop production in Canada, and the development of dry bean varieties adapted to the environment, with improved seed quality and disease resistance, have resulted in a substantial increase in dry bean production since the mid-1990s. In Canada, 220 000 MT of dry bean are harvested annually from more than 110 000 ha, with Ontario, Manitoba and Alberta being the largest producers. Approximately 70% of the production is exported to other countries.

Dry bean growth is favoured by a mean temperature of 18 to 22ºC during the growing season. Dry bean is grown under both dryland and irrigation. Dryland bean production is in regions with high rainfall (> 400 mm) such as the Red River Valley of Manitoba and Ontario. In the semi-arid prairie (AB and SK), supplemental irrigation is required to obtain higher seed yield. Dry bean plants are extremely sensitive to frost, and therefore, adequate care must be taken to protect plants from frost damage. Like most members of the grain legume family, dry bean plants establish a symbiotic relationship with Rhizobium bacteria to fix atmospheric nitrogen in root. Dry bean plants are affected by several diseases including fungal diseases (see fungus) such as root rot, white mould and anthracnose, and bacterial diseases such as common bacterial blight, halo blight and bacterial wilt. Diseases reduce the yield and quality of bean pods and seeds.

Bean seed is high in plant-based protein, fibre, minerals, folic acid and resistant starch, and is low in fat. Consumption of dry bean has been linked to reduced risk of several diseases including cancer. Diverse end-uses of bean include cooking, canning (commercial and home), quick-cooking/dehydrated bean (in soups and noodles), frozen bean (for use in soups), bean flours (for use in gluten-free pastry and pasta), bean flakes and extruded products (breakfast cereals and nutrition bars).