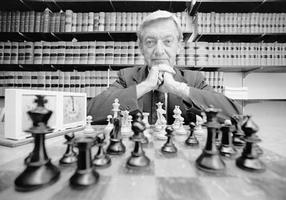 Daniel Abraham Yanofsky, OC, chess grandmaster, lawyer, municipal official (born 26 March 1925 in Brody, Poland; died 5 March 2000 in Winnipeg, MB). Yanofsky was the first Canadian chess grandmaster. He came to Canada at an early age and developed a talent for chess, winning his first tournament at 12. He qualified for the Canadian Olympiad team for the 1939 world team championships in Buenos Aires, where he received a special prize for best score on Board 2. During the Second World War, he served in the Royal Canadian Navy.

Yanofsky played in many European tournaments and in 1953 won the British championship. His career in Canada included eight Canadian championships between 1941 and 1965, and 11 appearances on the Canadian national team, the last in 1980 at Malta. He received the grandmaster title in 1964 for his performance on Board 1 for Canada at the Olympiad in Tel Aviv. He continued to compete until 1986. Yanofsky was a lawyer and was on the Winnipeg City Council until 1986. He was awarded the Order of Canada in 1972.