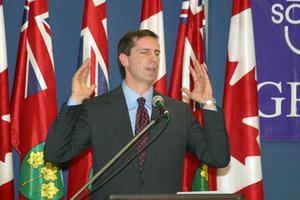 Dalton James Patrick McGuinty, lawyer, politician, 24th premier of Ontario 2003-13 (born 19 July 1955 in Ottawa, ON). Born into a political family (his father, Dalton McGuinty Sr., was MP for Ottawa South until his death in 1990), McGuinty was raised in Ottawa and educated at McMaster University (B.Sc) and the University of Ottawa, where he studied law. He was called to the Ontario bar in 1983 and was made senior partner at the firm of McGuinty and McGuinty. The following year he also became a lecturer in Business Law at Carleton University.

In 1990 McGuinty turned to politics, running successfully for the provincial Liberal Party in the riding previously held by his father. He was re-elected in 1995, and in 1996 was made leader of his party. Both before and after becoming leader he served as Opposition Critic for a variety of portfolios, including Energy, Science and Technology, and Intergovernmental Affairs.

The 1999 election against Mike Harris's Conservative government was McGuinty's first "baptism by fire." The Liberals went into the election leading in the polls (as they had done, to no avail, in 1990 and 1995) in a province that was beginning to sour on the Tories' so-called "common-sense revolution." For their part, the Tories ran a campaign that focused on McGuinty's relative lack of experience, characterizing the Liberal leader as "Just Not Up For the Job." The Liberals came out of the election with 35 seats to the 59 taken by the Conservatives.

However, Harris may inadvertently have done McGuinty a favour. During the next four years in opposition McGuinty worked to shed the "nerd" image that the Conservatives had helped to foster and developed a program of ideas that challenged prevailing Tory policies. In the meantime the Tories were having serious troubles of their own. Public support for the Tory gospel of tax and spending cuts was falling, and the Walkerton scandal of 1999 appeared to spotlight dramatically the risk of such cuts to public welfare. In April 2002 Harris stepped down and was replaced by his former finance minister, Ernie Eves. Over the next year the Tory government was plagued by a series of troubles, including power shortages and an outbreak of the SARS virus. Going into the fall 2003 election, the Liberals were once again leading in the polls.

McGuinty's well-organized campaign directly challenged eight years of Tory policies. He pledged, among other things, not to implement reductions in corporate and personal income taxes promised by the Conservatives (and to boost the tax on corporations to its former level of 14 percent from 12 percent), and to increase spending on health care and education. He also promised to rescind policies that favoured parents with children in private schools and to increase taxes on tobacco. Surprisingly, McGuinty's approach was supported across income and age groups.

On 2 October 2003, McGuinty led his party to a majority government - the first time the Liberals had defeated an incumbent Conservative government since Mitch Hepburn led the party to victory in 1934. It was also only the second time in half a century (the last time was in 1987) that the Liberals had won an election outright. Out of 103 legislature seats, the Liberals took 72 (46% of the popular vote), the Tories 24, and the NDP 7. The Liberals gained seats in every part of Ontario, including a majority in the Toronto area, leaving the Tories with a largely rural base. The turnout of eligible voters, however, which was expected to surpass the 1999 level of 58%, fell instead to 52%.

Some observers opined that the size of the Liberal victory owed something to the Tories' poor campaign strategy, which included various well-publicized gaffes. Others labelled McGuinty's success a "counter-revolution." But as one editorialist noted, Ontario voters "did not elect Che Guevara to replace Ernie Eves." They elected a moderate politician who promised to reinstate the kind of conservative liberalism (with room for social programs) that had been known in Canada for many decades. They also elected a premier committed to working with his provincial Liberal compatriot in Québec, Jean Charest, and the federal Liberals in Ottawa.

McGuinty was elected for a second term, from 2007 to 2011. On 1 July 2010 his government implemented an unpopular 13% Harmonized Sales Tax (HST), replacing the federal goods and services tax and the provincial sales tax. McGuinty lost further support when he proposed to cancel the province's commitment to increase Minimum Wage from $8.75 to $10.25.

Though McGuinty was elected to a third term on 6 October 2011, his party lost its majority status and was reduced to 53 out of 107 legislative seats. In the months that following his party faced increasing opposition as it introduced several unpopular measures such as its introduction of Bill 115 that would limit public sector wages and bargaining power, and it faced scrutiny over cancelled energy projects in Oakville and Mississauga.

McGuinty unexpectedly announced his resignation as party leader in October 2012, but chose to retain his seat in the legislature, representing Ottawa South. Kathleen Wynne was chosen as his successor on 11 February 2013.