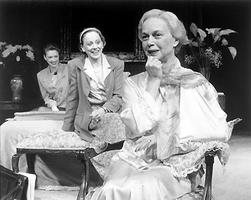 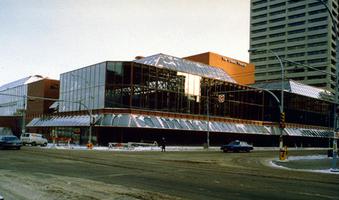 The largest of Canada's regional professional theatres, the Citadel Theatre was founded in 1965 by Joseph H. Shoctor and 3 partners as Edmonton's first professional theatre. Joseph Shoctor, in his capacities as executive producer and chair of the board of governors, remained a driving force behind the Citadel until his death in 2001.

The theatre gets its name from its original home, a former Salvation Army building bought and renovated for a combined cost of $250 000. The first show, opening 10 November 1965, was Edward Albee's Who's Afraid of Virginia Woolf?

The Citadel's mainstage program has been typical of most regional theatres - a mix of classics and of contemporary hits from abroad, with Canadian pieces fitted in as they have met the overall "standard."

The first 2 artistic directors were John Hulbert (1965-66) and Robert Glenn (1966-68), but the first really to sell the theatre to a local audience was Sean Mulcahy (1968-73). Mulcahy was replaced by John Neville, whose tenure (1973-78) first established the Citadel on the national theatre scene. Neville also originated a second series, Citadel Too, in 1975. This series, which featured "avant-garde" pieces, was aimed at a younger or more adventurous audience.

The appointment of Peter Coe from Britain as Neville's replacement in 1978 set off a controversy involving Canadian theatre and cultural nationalists, Canadian Immigration, Actors' Equity and the Guild of Canadian Playwrights. Coe, who remained director until 1980, initiated a period that lasted into the mid-1980s, during which the Citadel sought a more international identity as an exporting theatre. An effort was made to produce shows that could move on to New York or London. Several shows did make the move, and one, A Life, from the 1980-81 season, received 4 Tony nominations for its Broadway run. Better remembered than the successes are the large-scale failures, such as Duddy, in the 1983-84 season. This first co-production between a regional and the commercial theatre cost some one million dollars, but a planned cross-country tour was abandoned.

Following Coe's resignation, the Citadel became the first regional theatre to operate without an artistic director, from 1980 to 1984 and again from 1987 to 1991, when management teams led by Shoctor set the seasons and hired directors for the individual productions. Gordon McDougall, artistic director from 1984-87, opened the new Maclab Theatre in December 1984 with a hugely popular production of Peter Pan, by J.M. Barrie. The later expensive and ambitious musical Pieces of Eight (an adaptation of Treasure Island) did not achieve the same level of critical or popular success. McDougall, however, distinguished himself in the Rice Theatre seasons, in which he directed risky contemporary works using the smallest of the Citadel's performing spaces to great advantage.

From the early to mid-1990s under Robin Phillips, director general from 1991 to 1995, the Citadel began to regain national prestige. In 1996 the Citadel became the first regional to produce a work in association with the Stratford Festival, the Feydeau farce A Fitting Confusion.

Under resident director Duncan McIntosh, artistic director from 1995 to 1999, the Citadel ran a single subscription series - a scaling down from earlier periods when as many as 3 subscription series had run concurrently: a mainstage series in the Shoctor (1976-95); a series of smaller-scale and "risky" pieces in the Rice (1976-95); and a family series in the Maclab (1986-95). In 1996 the Rice became the home of a series of new Canadian works funded by the Edmonton Community Foundation.

McIntosh was the first Canadian-born and -trained director at the Citadel. His period was a time of retrenchment, notable for innovations such as the Actors' Ensemble, which moved toward a resident acting company to provide regular work to a core group of local actors. Also notable was his world premiere of Raymond Storey's South of China (1997), the first new Canadian work to appear on the Citadel mainstage since 1980.

In the fall of 1998, the Citadel announced the appointment of its first Edmonton-born and -trained artistic director, Bob Baker, effective January 1999. His term has been the longest of any artistic director in the Citadel's history. A major innovation under Baker has been the move to new play development, including the appointment of Marty Chan as the Citadel's first playwright-in-residence in 2002. By the 2004-05 season, the Citadel, a theatre once admonished for lack of new plays, was able to point to a new play by a local playwright in each of its 3 main series. Vern Thiessen, who had also served as artistic associate of play development for the Citadel, succeeded Chan as playwright-in-residence in 2007. Thiessen's Einstein's Gift, which had its premier at the Citadel in 2003, won the Governor General`s Award for drama in that year.

The Citadel has carried out several notable programs, which include the Citadel Theatre School, founded in 1966 and still in operation; Citadel on Wheels/Wings (1968-85), a touring educational company that performed 55 plays (65% of them Canadian) in Alberta and the Northwest Territories (making the Citadel the first professional theatre to fly north of the Arctic Circle); the International Children's Festival (1982-94); and the Teen Festival of the Arts (1988-94).

In 1995 the Citadel received a $5-million pledge to its trust fund from Edmonton's philanthropic Hole family. This was one of the largest single private donations ever made to a Canadian theatre.

The 277-seat original building was replaced by an elaborate complex currently valued at some $40 million. Built in 3 phases between 1974 and 1989, the Citadel houses 5 performance spaces: the Shoctor Theatre, a 685-seat proscenium; the Maclab, a 685-seat thrust; the Rice, a 250-seat studio; Zeidler Hall, a 240-seat auditorium used mainly for films; and the Tucker, a 150-seat amphitheatre. It also boasts the Lee Pavilion, a large indoor park complete with a waterfall. As a work of architecture, the Citadel Theatre unifies the different performance spaces in an external shell featuring extensive glazing combined with red brick. The many windows make its activities visible from the exterior, thus enlivening an important downtown intersection. Architecture critics of the period celebrated the clear articulation of the theatre's many different functions; the partner-in-charge, Barton Myers, spoke of creating a "warm and theatrical place."