This article was originally published in Maclean’s magazine on June 19, 1995. Partner content is not updated. 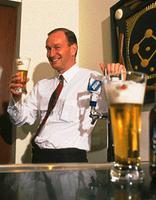 President of Labatt's Brewery after the sale to a Belgian Brewery (courtesy Maclean's).

Two years ago, acquisition-hungry executives at Belgium-based Interbrew S.A. turned their attention to the $30-billion North American beer market. Their debt-free family-controlled company was Europe's fourth-largest brewer, with sales of more than $2 billion in 80 countries, and it was snapping up breweries in emerging markets such as Romania and southern China. But Interbrew's big brands, beers such as Stella Artois and Jupiler, were virtually unknown in North American bars. And after exhaustive study, the Interbrew executives decided there was simply no way to crack that highly competitive, mature market.

Then, three months ago, an opening suddenly appeared when takeover artist Gerald Schwartz of Toronto-based Onex Corp. began laying the groundwork for a hostile bid of $2.3 billion for John Labatt Ltd. of Toronto. Within the small fraternity of international brewers, Labatt managers put out the word that they would welcome a so-called white knight, a friendly bidder who might improve on the Onex offer. Working frantically in secret sessions with a trio of top Labatt executives, the Belgians brewed up a $2.7-billion offer for Labatt that appeared last week to have won them the company. Labatt's board of directors endorsed the deal, although it is not expected to close until late summer and is still subject to an Investment Canada review. Hugo Powell, president of Labatt Breweries of Canada, told Maclean's: "Right from our first two-hour meeting, we saw that our companies shared many values. We realized we had a chance to get a committed, patient owner who could provide great growth potential."

Interbrew has already set out a strategic plan to take advantage of the synergy between the two operations - and it entails major surgery for Labatt. The company, which started brewing beer in London, Ont., in 1847, will be shorn of its entertainment holdings, which include The Sports Network, Le Réseau des Sports, an 80-per-cent stake in the Discovery Network and a 42-per-cent stake in Toronto's SkyDome. The Toronto Blue Jays baseball club, 90 per cent owned by Labatt, and the wholly owned Toronto Argonauts football team are also likely to be sold, although Interbrew's Canadian spokesman, Bruce MacLellan, says that no final decision has been made on the fate of the sports teams. Under Interbrew's guidance, Labatt's push into the U.S. and Mexican beer markets will be stepped up, and the company's ongoing Canadian advertising war with rival brewer Molson Companies Ltd. will continue. As Interbrew's Belgium-based spokesman Gerard Fauchey noted: "It's very simple. We're brewers, not managers of hockey or baseball teams or television stations."

Labatt's entertainment holdings, which employ 650 people, are expected to be sold in short order. Company managers were talking last week with suitors, and industry analysts touted CanWest Global Communication Corp. of Winnipeg as a possible buyer of the television networks. The money raised from asset sales will pay down $1.6 billion in acquisition loans advanced to Interbrew by a banking group that includes the Canadian Imperial Bank of Commerce - Interbrew has put up $1.1 billion in cash for the Labatt purchase. Powell says that money raised from selling the entertainment companies should generate up to $1 billion for debt reduction over the next year.

Conservative financing is one of the cornerstones of Interbrew, a private company that is 51 per cent controlled by Belgium's Van Damme and de Spoelberch families. The brewer has been making beer in Europe since 1366, and its blue-blood board of directors includes two barons, two counts and a viscount. The chief executive is Hans Meerloo, and it was his personal call to Labatt's chief executive officer, George Taylor, that led to a secret gathering of the top three executives from each brewer - without investment bankers - at the offices of Labatt's law firm, Blake, Cassels & Graydon, a block away from Labatt's Toronto headquarters. That two-hour meeting in April laid the groundwork for the deal. Although Meerloo declined to give interviews last week, he said in a news release: "John Labatt is an extremely attractive asset, in line with our company's global strategy of growing into a major international brewer."

Interbrew's aggressive plans to expand into global markets are typical of the increasingly international consumer-products sector: similar mergers and acquisitions have been completed by soft-drink, cigarette and soap makers. Says analyst Irene Nattel of BZW Canada Ltd.: "A brewer in a mature market, where volume is flat at best, can fight for market share, but that is not an easy battle." So, she added, "brewers are looking abroad for growth, acquiring established domestic brands in other mature markets or targeting the emerging markets."

When the entertainment assets are stripped away, marked similarities emerge in the beer marketing philosophies at the Canadian and Belgian companies. Rather than push worldwide brands - the strategy used by Dutch brewer Heineken NV to sell its familiar green-bottled beer and by Anheuser-Busch of St. Louis, Mo., to sell Budweiser - Labatt and Interbrew have both tried to establish and develop specific regional brands. Powell says: "We look at Canada as 10 different regional markets, almost as 10 countries, and see the United States as at least 50 different markets." Interbrew also backs a series of local beers within its vast empire - only Stella Artois is considered an international brand.

Boosting Labatt's growth means expanding these regional niches, particularly in the United States. Labatt plans to start shipping Kokanee, a beer brewed in British Columbia, into Washington, Oregon and Idaho, while Halifax-brewed Alexander Keiths beer will be exported into New England. Mexican beers from Femsa, such as Dos Equis and Tecate, will be heavily promoted in about seven major U.S. cities with large Hispanic populations. Labatt, Powell says, projects that its sales in the United States will increase by up to 20 per cent annually over the next five years: last year, Labatt turned a $25-million profit on U.S. operations. Overall, the company made a $155-million profit in 1994 on sales of $2.3 billion.

In Canada, local managers are expected to remain in charge of Labatt's brewing operations; Powell, 50, will be in Belgium next week to discuss his role. Chief executive Taylor, 54, has already hinted that he will take early retirement.

Whatever personnel changes lie ahead, the battle with Molson for the hearts of Canadian beer drinkers will continue. Molson now holds 47 per cent of the domestic market compared with Labatt's 44.4-per-cent share. But Labatt has steadily gained ground: in 1991, Molson had a 52.3-per-cent share and Labatt held 41.9 per cent. By 1998, Labatt aspires to be the leading Canadian brewer. And to attain that objective, Powell says the company spent $185 million on sales and marketing in Canada last year - still about $40 million less than Molson. "The costs of the acquisition will have no effect on our marketing and R and D spending," he said. "We will continue to do what is needed to remain competitive." Powell added that Interbrew is anxious to use and to license Labatt's proprietary technology in foreign markets. Labatt's ice beer-making technique, for example, eliminates the need to store beer in steel vats for up to three weeks after brewing, which can translate into savings of about $30 million when building a brewery.

Meanwhile, the man who launched the takeover of Labatt, Onex chief executive Gerald Schwartz, will be well compensated for his initiative. Onex was able to buy 2.8 million Labatt shares at an average of $20 each prior to making its $24-a-share bid. It will make a $24-million profit when it sells those shares to Interbrew, which has offered $28.50 a share for Labatt. Schwartz estimates Onex will walk away with about $5 million once its legal and banking fees are covered. After proving its financial muscle by lining up $940 million in equity financing for the Labatt deal, Onex is now hunting for other acquisitions. Also on Schwartz's plate this summer are plans for a $50-million investment in a Los Angeles movie studio joint venture with Sony Inc., plus the digestion of the recent takeovers of a U.S. airline caterer and a fast-food-chain supplier.

Still, Schwartz is not taking the loss of Labatt in stride. Over the past 12 years, Schwartz has built Onex into a company with $6.5 billion in sales by winning takeover battles - not losing them. He told Maclean's: "George Taylor was able to come up with a terrific bid for Labatt while under a tremendous amount of pressure. I congratulate him." But, Schwartz added, "I am deeply disappointed by how things worked out. Show me someone who is always a good loser, and I'll show you a loser."

While investors appear to be warm to Interbrew's offer for Labatt, there was some criticism last week about the fee that Interbrew is guaranteed if a rival betters its bid for Labatt. If defeated, the Belgian brewer would receive $93.6 million in cash from Labatt plus an option to buy Labatt's Italian brewing operations for $165 million: Birra Moretti has 10 per cent of the Italian beer market and is expected to turn a $6-million profit in 1995. Several mutual fund managers complained that the fee was overly generous, given Interbrew's limited risk. Said Schwartz: "This fee is huge, and should be seen as objectionable by all shareholders since it prevents a rival bid from coming forward." But, in a fiercely competitive industry, all is fair when it comes to the war for global market share.