Barbershop. An a capella art form, sung in four-part harmony. Barbershop is one of the few musical forms indigenous to the New World.

History
According to folklore, the term "barbershop" originated in the turn-of-the-century small-town US, where it is said that men met at the local barbershop, not only for a shave and a haircut, but also for a little improvisational singing. It has however been established that the roots of barbershop are at least partly in quartets of Afro-American people in the southern US.

Four enthusiastic voices and simple harmonies sung by ear made barbershop singing quickly popular. Before long it outgrew the quartet concept (although that still drives it), evolving into choruses of singers with a conductor. Eventually the Society for the Preservation and Encouragement of Barber Shop Quartet Singing in America (SPEBSQSA) - now named the Barbershop Harmony Society - was organized. In the mid-1940s the female offshoot took root with the establishment of Sweet Adelines Incorporated. These two international organizations are the largest barbershop organizations in Canada, followed by the smaller Harmony Inc for women. The first Canadian chapter of the Barbershop Harmony Society was chartered in March 1944 in Windsor, Ont. The first Sweet Adelines chapter outside the US was chartered in Brandon, Man, on 23 March 1953.

Throughout North America and around the world, the barbershop chorus thrives, with many chapters numbering over 100 members. Barbershop singing has grown into an art dedicated to vocal production of the highest calibre. Quality assurance is achieved through comprehensive music programs, intensive workshops, and annual quartet and chorus competitions at regional and international levels.

Barbershop is a combination of several unique characteristics, such as chord structure (arrangements), the "cone-shaped" sound, interpretation and delivery. These are integral factors that contribute to the "lock and ring" characteristic of the style. The cone-shaped sound is created with the bass voice on the lowest tone, the baritone next up, and the lead (melody) sandwiched between the baritone and tenor voices. When sung accurately, this combination produces a sound that is lightest on the top and progressively wider and fuller down through lead, baritone and bass.

Construction of the Harmony
Barbershop music requires the study of only major, harmonic minor, and chromatic scales. Its arrangements are based on 11 chords: the major triad, dominant 7th, dominant 9th, major 6th, major 7th, major 9th, the minor triad, minor 6th, minor 7th, augmented triad and diminished 7th. The major triad, dominant 7th and dominant 9th chords provide the predominant sound of barbershop harmony, with the other secondary chords used as required by the melody and implied harmony, and for added flavour.

The way the chords are voiced is unique to barbershop style. When a barbershop chord is sung accurately with good vocal production and tuning, and vowel shape and resonance matched in each voice, the combination "locks" the chord, creating an overtone (or several) in the chord, which is clearly audible above the highest note actually being sung. When such overtones are present, the chord is said to "ring." This "lock and ring" characteristic is theoretically possible on every chord, but more easily achieved in the strongest voicings. Barbershop is the only vocal genre in which chord voicings are purposefully written to take advantage of the overtone series in this way.

Performance Style
The visual aspect is a major component of barbershop performance. The style is ad lib, and music is performed without hand-held manuscript. Appropriate delivery includes emotional involvement and physical movement that supports and enhances the lyrical and musical interpretive plan. The aim is to sell the song with unity and energy.

The North Metro Chorus of Sweet Adelines International, from North York, Ont (with their director June Dale), has won three world championships. They were the first chorus contender from outside the US to do so. In 2003, the female quartet Brava! from Vancouver, BC, won the international quartet championship - a first for a Canadian quartet. Outstanding Canadian male choruses include the Northern Lights, of Toronto, who are four-time silver medallists in international competition, and the Dukes of Scarborough, who were twice international champions. The Vancouver male quartet, Realtime, won the 2005 International Quartet championship. Canada has hosted the worldwide conference of both male and female international competitions. There are currently 4,500-5,000 barbershop singers in Canada, representing every province.

Cammi MacKinlay of Vancouver and Ellen Gallacher of Victoria have served on the board of directors of Sweet Adelines International. Robert A. Stebbins, professor of sociology at the University of Calgary, has written the book The Barbershop Singer: Inside the Social World of a Musical Hobby. 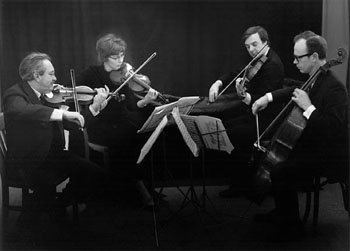 Blackie and the Rodeo Kings