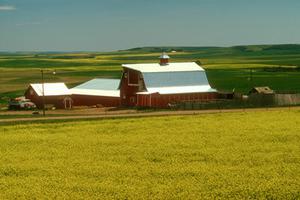 Baldur Rosmund Stefansson, plant breeder (born at Vestfold, MB, 26 Apr 1917; died at Winnipeg, 3 Jan 2002). Stefansson was a leader in the development of a variety of rapeseed modifying it from an unadapted crop that produced modest amounts of industrial oil, to an adapted food and feed crop. This edible oil crop known as canola rivals wheat in acreage usage and value, and has become one of the largest oilseed crops in the world.

From his early research which focussed on developing an oilseed crop for Manitoba, he became an internationally acclaimed plant breeder, best known for suggesting the elimination of erucic from rapeseed oil and producing low glucosinolate varieties. In 1974, Stefansson registered Tower, the first canola variety low in erucic acid and meal low in glucosinolates, and thereafter the appeal of the crop expanded. By 1999 approximately 14 million acres were dedicated to growing canola, supporting a 2.5 billion dollars a year industry. Stefansson was recognized for subsequent significant genetic alterations to the food value of the oil, industrial quality of the oil, and feed value of meal produced from the seed.

Stefansson was active in studies relating to production of hybrid canola. In recognition of his achievements he earned many awards, including the Royal Bank Award for a contribution to humanity (1975), the Queen's Jubilee Medal (1977), and the Manitoba Institute of Agrologists' Distinguished Agrologist Award (1981). Stefansson was inducted as an Officer of the Order of Canada (1985) and in 2000 was awarded the Order of Manitoba and the Order of the Falcon (Iceland). He was inducted to the Canadian Agricultural Hall of Fame in 2002.