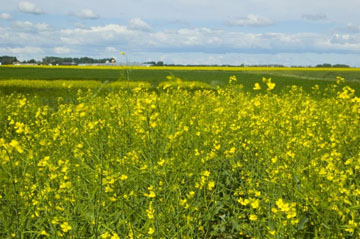 Canola is a type of rapeseed and is a Canadian invention; it is characterized by having improved nutritional qualities in both the oil and the meal. Unlike other seeds and plants canola and rapeseed do not have a single Latin name. Canola plants belong to the Brassicaceae (Cruciferae) family that comprises about 350 genera and 3000 species, including Brassica campestris or rapa (turnip) Brassica napus (rutabaga), Brassica oleracea (cabbage and cauliflower) and Brassica juncea (mustard). Brassica campestris originated in the foothills of the Himalayan Mountains; Brassica napus probably originated in the Mediterranean region and was the result of natural crosses between Brassica campestris and Brassica oleracea plants. Canola varieties could belong to Brassica rapa, Brassica napus or Brassica juncea. Canada is the biggest single producer of canola. More than 13 million tonnes of canola are produced in Canada annually and the objective is to produce 15 million tonnes by 2015. About half the canola produced is exported to various countries. The main importing countries are the United States, Japan and Mexico.

Rapeseed has been an important source of edible vegetable oil in Asia for almost 4000 years and was used as a lighting oil and edible oil in Europe since at least the Middle Ages. Rapeseed was first grown in Canada during the Second World War as a source of high-quality lubricant for marine engines. Canola oil has become a major source of cooking oil, margarine, salad dressing and shortening. The meal remaining after oil extraction is a high-protein feed for livestock.

Early warnings of potential problems with erucic acid (C22:1) provided the motivation for changing the fatty acid composition of the oil of the rapeseed grown in Canada. The development of the canola as it is known today is the result of the work of 2 Canadian researchers, B.R. Stefansson and R.K. Downey, who jointly identified the first low erucic plants in rape (Brassica napus). The development of the first low erucic acid and low glucosinolate canola, named Tower (1974), was accomplished by conventional breeding, which is the selection and the crossing of seeds from plants low in these 2 components. Stefansson and Downey received several awards (eg, Royal Bank Award and Order of Canada) in recognition of their contributions for developing canola. Today, almost all of the canola grown in Canada is herbicide tolerant. There are 3 types of herbicide tolerant canola. Two were obtained by insertion of a gene and are genetically modified organisms (GMOs); they are Round-up Ready® and Liberty Link®. One, Clearfield®, was obtained by mutation and is a non-GMO.

In Canada, canola is usually seeded in spring (May) and harvested from August to September; however, in Southern Ontario, winter canola can be seeded in August and harvested the next year from early July to August. Sowing and harvesting methods are similar to those of cereals. Mature seeds contain on average 43% oil and have thin black, brown or yellow seed coats.

The canola industry in Canada is one of the most innovative. High stability canola oil was developed in response to the ban of trans-fatty acids in food products. This new oil has higher levels of oleic acid (65% to 74% versus 60%) and lower levels of ∝-linolenic acid (2% to 3% versus 10%) than conventional canola oil. ∝-Linolenic acid is a polyunsaturated fatty acid (3 double bonds) that oxidize very easily under the high temperature conditions of frying. This leads to the formation of undesirable flavours and trans-fatty acids. This high stability oil is mainly used by the food industry for frying and allows for the reduction/elimination of trans-fatty acids from fried foods (eg, potato chips), making these products a healthier choice.