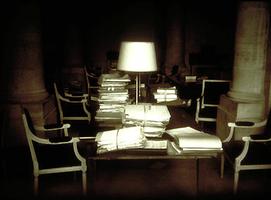 Angela Grauerholz, photographer (b at Hamburg, West Germany 10 Jan 1952.) A graduate in graphic design of the Kunstschule Alsterdamm in Hamburg, she also studied literature and linguistics at the University of Hamburg, and received a Master's degree in photography from Montréal's Concordia University in 1980. She has lived in Montréal since 1976.

Grauerholz's work has been shown in exhibition for over 12 years and occupies an important place in Canadian and international photography. She was among 9 artists who represented Canada at Documenta IX in Kassel, Germany, in the summer of 1992, and participated in the 1995 Carnegie International in Pittsburgh. A touring exhibition of her works in Canada and Europe in 1995-96 organized by the Musée d'art contemporain de Montréal showed her photographs along with an important installation by the artist entitled Eglogue ou Filling the Landscape. Other solo exhibitions of her work have been mounted by the Musée du Québec (1998) and the Museum of Contemporary Photography in Chicago (2000).

Few artists convey in their work Grauerholz's assured sense of progression or her attitude of pure experimentation. Her philosophical reflections on memory and the process of making images break with photographic tradition, and her work is distinguished by the self-referential quality of her images. Since the early 1980s, in her search to redefine the art of photography, she has taken up different themes that overlap and draw one from the other: portraits, interior and exterior scenes with or without people, etc. Her work gives an impression of timelessness that is expressed in a paradoxical way through images that are commonplace but at the same time sublime and unexpected. Viewers are drawn into a sense of confusion between the place of the experience and the relation between things and beings. As a whole, Grauerholz's work invites analysis and, in a dialectic of presence and absence, raises the questions that hide beneath the obvious.