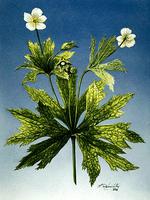 A. canadensis is found throughout Canada excluding Newfoundland and is Manitoba's floral emblem (artwork by Claire Tremblay).

Anemone, or wind flower, perennial, herbaceous plant of genus Anemone, family Ranunculaceae. The genus contains 120-150 species, most found in temperate and subarctic regions. The usually single, goblet-shaped flower lacks petals but has 5-20 petallike sepals. Colours range from white through purple to red. Anemones have a dry, one-seeded fruit (achene). Of the 20 North American species, 11 are native to Canada.

The white-blossomed Canada anemone (A. canadensis), the most widespread species in moist locations, is found throughout Canada, excluding Newfoundland. A. patens, Manitoba's Provincial floral emblem since 1906, is commonly but incorrectly known as the prairie crocus. Its purple-tinged sepals are a beautiful sight on the Prairies early in spring. The most familiar cultivated forms are the fall-blooming Japanese anemone (A. hupehensis) and the spring-blooming florist's anemone (A. coronaria). Anemones require well-drained soil and partial shade. They are grown from seed or propagated by division. 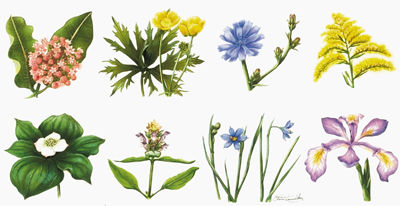