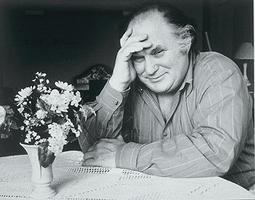 Albert Samuel Waxman, "Al," TV and movie performer, director (b at Toronto 2 Mar 1935; d there 17 Jan 2001). As Larry King, the title character of CBC-TV's situation comedy King of Kensington (1975-80), he became one of Canada's most familiar actors. Later roles in TV dramas brought critical praise. Waxman studied acting in New York in 1959, performed in Hollywood films, and directed short subjects and full-length Canadian movies before his CBC-TV role, which earned him an ACTRA award in 1976.

A stunning performance as an unemployed labourer in The Winnings of Frankie Walls won Waxman the coveted Earle Grey Award in 1981. He also starred as Lieutenant Bert Samuels in the American TV series Cagney and Lacey from 1981 to 1988. His direction of the CBS-TV movie Maggie's Secret (1990) won him an Emmy nomination, as well as the Scott Newman Award for awareness of drug and alcohol abuse.

Throughout the 1980s and 1990s, Waxman directed for both national television (episodes from Littlest Hobo, Cagney and Lacey, Night Heat, Hitchcock Presents and Max Glick for both American and Canadian television) and the stage (A Shayna Maidel and Lost in Yonkers). Widely respected by his peers, Waxman served as Chairman of the Academy of Canadian Cinema and Television (1989-92).

Waxman was active in fundraising and charitable activities across Canada. In 1992 he was co-executive producer, co-director and host of the series Missing Treasures (a show that seeks to reunite lost children with their parents). The series was honoured by the Houston International Film Festival and received the Gold Award for best public affairs program.

In the 1990s Waxman continued to act, to great acclaim, in a number of TV movies and feature films in both the US and Canada. These include I Still Dream of Jeannie, Scales of Justice, Due South, Cagney and Lacey Reunion, Golden Phoenix, Net Worth, Gotti and The Rescuers. He was directed by such giants as Louis Malle, Sydney Lumet and Peter Bogdanovitch. In 1997 he won acclaim for his portrayal of Willy Loman in the Stratford Festival's production of Death of a Salesman and was signed to play Shylock in Stratford's 2001 production of The Merchant of Venice at the time of his sudden death.