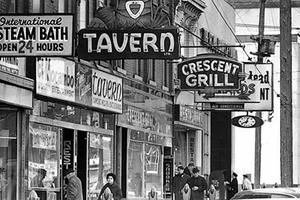 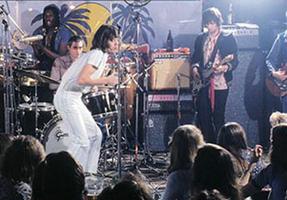 The famous neon palm tree sign hanging out over the sidewalk of Spadina Avenue has served as a beacon for entertainment in TORONTO for more than six decades. Over the years, the El Mocambo's main and second floor stages have played host to blues musicians and rock groups, reggae acts and country bands, major stars and indie artists. Of all the acts to appear under the neon palm, none was more famous--or notorious--than the Rolling Stones.

The building at 464 Spadina Avenue has played a pivotal role in Toronto's cultural history. Its origin as an entertainment venue dates back to 1850, but it was not until the neon palm tree sign was erected in 1946 that the El Mocambo legend was born. Marilyn Monroe reportedly dropped in for a drink in 1958 and artists from U2, Elvis Costello and Duran Duran to Blondie, the Ramones and Stevie Ray Vaughan have all appeared on its stages.

The El Mo made international headlines in 1977 when the Rolling Stones performed upstairs on 4-5 March, billing themselves anonymously as "the Cockroaches." Word leaked out and massive crowds turned up for what was the Stones' first club date in 14 years. The shows were recorded and released as the album Love You Live. The event took on political overtones due to the presence of Margaret Trudeau, then wife of Prime Minister Pierre TRUDEAU, whose appearance and sightings with Mick Jagger caused a national scandal.