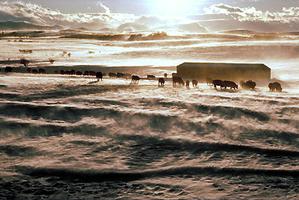 Wind chill is the popular name used to describe what cold WEATHER feels like at various combinations of low temperature and high WIND. The loss of body heat increases with a rise in wind speed, so that at the same temperature, a person will feel colder when the wind is blowing than when it is not. The effect of wind is to lower a person's temperature by evaporating moisture on, and blowing heat away from, the skin. Inanimate objects that have no heat to lose - a mail box or metal fence, for instance - are not really affected by the wind at all.

The more pronounced the air movement (wind or moving air produced by walking, skiing or riding in a convertible) and the greater the temperature difference between the surface of the object and the air, the greater the heat loss. Wind cooling is what happens when you blow on a mug of steaming hot chocolate to cool it to room temperature. But you cannot make it colder than that, no matter how hard you blow. Likewise, no matter how strong the wind blows, it cannot lower the temperature below that of the surrounding air. Of course, the hot chocolate would cool down to room temperature in any case, the blowing simply speeds up the process.

How The Term Arose

The famed polar explorer and geographer Paul Siple first used the term in 1939. During the second expedition of Admiral Richard Byrd, Siple and his partner Charles Passel conducted experiments at Little America, Antarctica, on the time required to freeze water in plastic vials exposed outside in the wind. They developed a formula for relating heat loss to wind speed and air temperature, expressed in units of atmospheric cooling; eg, watts per square metre. Later, the formula was modified to allow computation of a wind chill equivalent temperature.

Of course there is a considerable difference between water-filled plastic tubes and a person properly clothed for the weather. The Siple-Passel approach is only an estimate of the discomfort felt by humans under various temperature and wind conditions. It does not take into account many other factors important for determining a person's sensitivity to cold. Whether the person is running, walking or just sitting; whether the sun is shining; the humidity; a person's age, physical condition and health; the amount and insulation quality of garments worn - all can affect the rate of cooling of the human body. In spite of its shortcomings and the many efforts to develop a more comprehensive measure of cooling discomfort, Siple's simple expression continues to gain acceptance. Wind chill graphs and tables in metric and imperial units and computer programs abound. The public and the military find wind chill estimates helpful in deciding how much clothing is required to protect against the cold and wind. It is also a valuable indicator about the likelihood of frostbite and excessive loss of body heat or hypothermia. Its popularity makes it a useful weather term. Environment Canada issues wind chill warnings for severe wind chill episodes.

Two means of expressing the wind chill are the heat loss in watts per square metre (W/m2) and the equivalent air temperature in degrees Celsius (°C). Examples of wind chill values and their effects include the following:

The highest wind chill values in Canada are found in January over the barrens northwest of Hudson Bay. Baker Lake, Nunavut, has the highest wind chill in Canada. Farther north over the Arctic islands, wind speeds are less than those in the southern Arctic and consequently the wind chill is also lower. Southern cities also experience high wind chills. Winnipeg has wind chills comparable to those in the High Arctic and Montréal is not unlike the relatively calm Yukon. The percentage of time that the wind chill exceeds -20°C (1400 W/m2) or the shivering point in January is 83% at Winnipeg, 62% at Edmonton, 42% at Ottawa, 17% at Halifax and under 1% at Vancouver and Victoria. The coldest wind chill, since recordings were begun in 1953, occurred at Pelly Bay, NWT [Nunavut], on 13 January 1975, when the equivalent wind chill temperature was -92°C and the heat loss was 3357 W/m2. At the time, the air temperature was -51°C and the winds were 56 km/h.